Something Unique About It 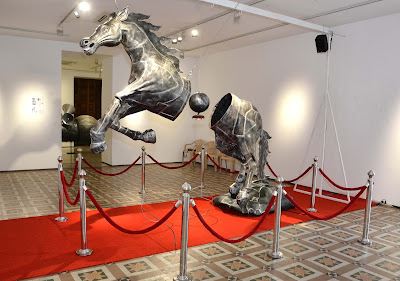 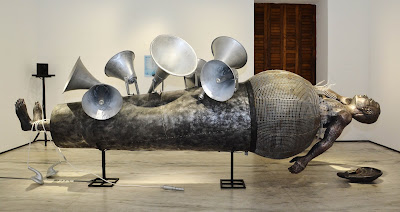 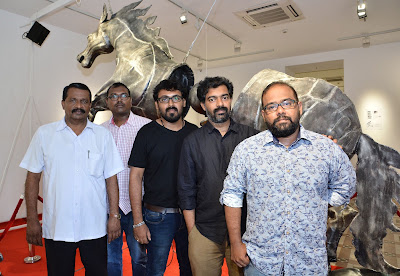 For the first time in India, a poetry installation, combining sound and sculpture, took place at the Durbar Hall Art Gallery, Kochi

When the eminent danseuse Mallika Sarabhai placed her hands around a globe hanging between the head and tail of a horse sculpture at the Durbar Hall Art Gallery, Kochi, the voice of poet Ajeesh Dasan could be heard on the speaker system.

“The horse declared:
I am the National Animal
My ancestors took part in the freedom struggle.
I am not applying for a pension
As I do not have any certificate.
“Other animals stood around the horse
The elephant, the ass, the giraffe,
The peacock, the boar, the lion.”

A shrill neighing sound of a horse was heard on the soundtrack. Expectedly, this was followed by the angry roar of a tiger (India's National Animal), not happy at the desire of the horse to replace him. Thereafter, there was the rumble of an elephant, as well as the grunts of the ass and boar.

The poem ended with the chilling sound of a cage closing. “The zoo-keeper comes up and calmly pushes the horse into the cage,” says Ajeesh. “People are also getting caged and losing their freedom.”

For the audience, which included the former Education Minister MA Baby, the deputy mayor of the Cochin Corporation, Bhadra Satish, artist Bose Krishnamachari, the tribal activist CK Janu, and actor Joy Mathews, this was an unique experience. Not surprisingly, they listened in rapt attention. This is the first time in India that a poetry installation has been done.

Some time ago, when film-maker Vinod Krishna read Ajeesh’s poem, 'Deseeya Mrigam' (National Animal), he was reminded of the late American chess genius Bobby Fischer. “The Cold War was taking place between America and Russia, but Bobby was a man who did not believe in boundaries,” says Vinod. “The horse is also like that.”

But man is bound by too many restrictions and boundaries. “A human being cannot go anywhere without a passport,” says Vinod. “We have so many cards: Aadhar, Ration and the Unique Identity Card. But we come to the earth without any document. In the end, we become victims of the corporate culture and those who want to rule over us.”

One day, Vinod felt that there was a scope to do something with it. And that is how he came up with the idea of an installation. But he wondered how to get the funds for it. When he broached the idea to his lawyer-friend, P. Raveendranath, the latter immediately contributed Rs 1.5 lakh. The remaining Rs 1.5 lakh was got through individual contributions as well as loans.

Incidentally, the rearing-up horse, made by the sculptor Gabriel George, is 70 per cent iron, while the rest is foam and scrap.

The second installation, again made by Gabriel, is of a man lying down, his body shaped like a microphone, but with several loudspeakers attached to his body. The poem, 'Sabda Mahasamudram' (Ocean of voices), is by the talented poet S. Kalesh.

Here is the first stanza:

'A man, rankled
by his own sound
about to sculpt
a stout silence and play
suddenly one day
found himself ringed
by a herd of puny
little sounds.'

“The rulers are telling us what to do and what not to do,” says Kalesh. “And this is represented by the loudspeakers. The person represents the common man who is unable to talk back. We have so many things to say, but are not able to do so. Today, along with this loss of freedom, there is a simultaneous rise of fascism. We no longer have an individuality.”

In order to bring attention to the project, Vinod decided to rope in a celebrity. So, he sent the images, as well as the concept, to actors Nandita Das, Shabana Azmi and the activist Mallika Sarabhai. “All of them expressed an interest and said they would be willing to come to Kochi,” says Vinod. “But, when the hall was booked, only Mallika was free to come.”

Apart from Mallika, many ordinary people, too, also came. One morning, a 34-year-old physically challenged man arrived in a wheelchair. “He had been to many art shows,” says Vinod. “But after listening to the two poems, he suddenly felt a desire to stand up and walk. This was the first time he was experiencing this feeling. I was deeply moved by this.”

Interestingly, Vinod says it was the youngsters and women who enjoyed the show the most. “Many women told me that they felt a mental release when they heard the poems and saw the installations,” says Vinod. “I think it is because they have been suppressed for so long.”

Says the Mumbai-based Renganaath Ravee, the sound designer for the project: “Everybody wants to experience something new. In India, movies and TV serials are the only forms of entertainment. The traditional art forms are not moving with the times. Maybe, that is why there has been such a positive response to our show.”

(The New Indian Express, Kochi and Thiruvananthapuram)
at June 29, 2015