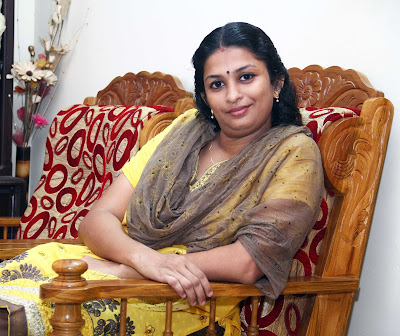 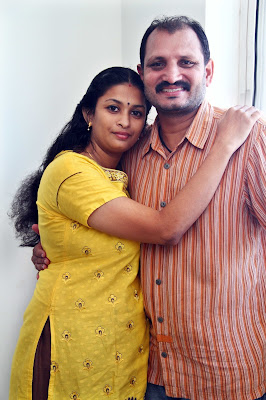 COLUMN: Spouse's Turn
Premi talks about life with the former Indian football captain, Jo Paul Ancheri
By Shevlin Sebastian
Photos by Mithun Vinod
When the proposal came, Premy was thrilled, because it was from the family of the famed footballer Jo Paul Ancheri. “I was interested in football, because my father would watch the game on TV,” says Premy. “I was also  excited to meet a celebrity for the first time.”
So, on October 5, 2008, Premy peeped through the first floor window of her house in Pazhanji, Thrissur district, and watched an ash-coloured Qualis enter the courtyard. Jo Paul, the former Indian football captain, was at the wheel. When he stepped out, she saw that he was wearing a blue shirt and a white mundu.
He went a few steps forward and then he turned and went back. Jo Paul had left the keys in the ignition.
While inside the house, Jo Paul enquired about Premy’s job. She was working in the accounts section of the Vikram Sarabhai Space Centre in Thiruvananthapuram. “He asked me whether I was keen to carry on working after marriage,” says Premy. “I said, ‘Yes’.”
And it was also a yes from both sides to the marriage. Two months later, on December 6, Jo Paul asked Premy to meet him in front of the Aswini Hospital in Thrissur. He came in a Maruti Alto car that belonged to his school friend, IM Vijayan, the famed former Indian footballer. They went for a long drive. Jo Paul told her that because of his career, he would be away from home for long periods. Premy agreed to adjust.

On the way back, they stopped at a roadside juice shop. When Premy took the glass, which contained orange juice, it slipped and the entire contents fell on her. The dress became ruined. “So we went to a Kalyan Silks store,” she says. “But because, it was already in the newspapers that Jo Paul was getting married, he stayed in the car, while I went in, and selected three dresses. Then Jo Paul came in, quickly selected one, and went out. I then paid the money, wore the dress and came out. It is a sweet memory for me.”

The marriage took place on December 28, 2008, at the Marta Mariam Big Church in Thrissur. At the reception, Jo Paul’s close friend, the actor Kalabhavan Mani sang a song. “But I was in a dazed state that I cannot remember the words at all,” says Premy.

Another of Jo Paul’s friend, Sudhir, presented her with a large pumpkin saying that he had brought it all the way from his garden in Kannur. “But the joke was on me,” says Premy. “There was a vegetable decoration at the reception hall. Sudhir had just picked the pumpkin from the table and presented it to me.”

For their honeymoon, the couple went to Kolkata where Jo Paul was the chief coach of the Mohun Bagan Sail Football Academy. They spent their days sight-seeing. One evening, when they stepped out of the Victoria Memorial, Jo Paul asked Premy whether she would like to go on a ride. “That was the first time that I got onto a horse-drawn carriage,” she says. “It was very exciting for me.”

On another occasion, they went to the hill station of Darjeeling. One day, they got up at 2.30 am and went halfway up the Tiger Hill on a jeep. “Then we got down and had to walk for the rest of the way,” says Premy. “Jo Paul found it easy, but I became breathless soon. It was the first time I was getting up so early. And it was quite cold even though I was wearing two sweaters.”

But the effort was worth it. They saw the sunrise at 3.40 am. “It was a magical sight to see the sun come over the Kanchenjunga mountains,” she says.

A few months after her marriage, Premy returned to Thiruvananthapuram, while Jo Paul stayed on in Kolkata. But today, while Premy continues to live in Thiruvananthapuram, with their two children, Christina, 6, and Paul, 1 ½, Jo Paul is the chief coach of the Thrissur-based Red Star Academy.

Asked about his qualities, Premy says, “Jo Paul is patient, mature and never loses his temper. On the other hand, I get angry very quickly. He is a true friend. If anybody has a problem, whether it is a family member, a relative or a friend, he will go out of his way to help them.”

This helps Premy in an indirect way. “When my daughter was one year old, she felt down and hurt her jaw and an operation needed to be done,” says Premy. “It was Jo Paul’s friends and their family members who accompanied me to the hospital.”

But Jo Paul has a weakness: his children. “If our children want something expensive he will buy it for them,” says Premy. “I always tell him that we should only buy what is necessary. If we give whatever they ask, it will spoil them. But he rarely listens to me.”

Interestingly, when asked whether she has seen Jo Paul play, she shakes her head. “But once I saw a CD of a few matches he played,” she says.  “I got so scared. It is so much a physical sport. I was so glad that I got married to Jo Paul after his career had ended. Otherwise, it would have been so stressful for me.”

(The New Indian Express, Kochi and Thiruvananthapuram)
at June 09, 2015