Kill Or Get Killed 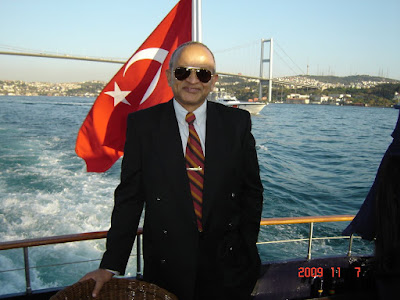 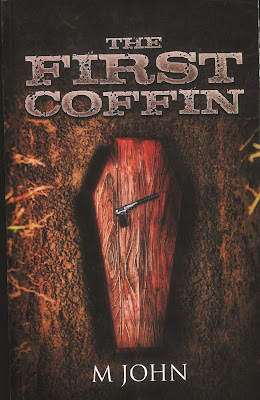 Air Vice Marshal M. John (Retd.) has written a racy thriller about the underworld in Mumbai
By Shevlin Sebastian
'When his right hand came up, it had the silenced pistol in it.... his first two shots hit the Joint Commissioner (Jt CP) in the stomach. One shot shattered the spine, and effectively paralysed the Jt CP waist downwards. The lady’s face was frozen in shock, while the girl was on the verge of a scream. He swung the pistol to the right and shot the girl twice in the face. He only had to move the pistol slightly to the left to shoot the lady twice in the face. The silencer was effective, and the ‘phuut’ sounds the shot made would have been barely audible outside the room.’
This is an extract from 'The First Coffin', a quick-paced thriller, written by the Delhi-based Air Vice Marshal M John (Retd).
The scene described is the murder of Dinesh Cherian, the Joint Commissioner of Mumbai Police (Crime), along with his wife and daughter, by a hitman hired by underworld don Rajesh Devgun. The latter was angered by some of the moves made by Dinesh which hampered his business.
In fact, the novel has two parallel strands. There is Ranjit Cherian, a carefree young man who is a fighter pilot in the Air Force. He happens to be the son of Dinesh. But he has an unexpected reaction to the murder of his family. He thirsts for revenge against the killers. And then there is Ranjit Jacobs, the hitman, who also has a military background. But he is furious because the Devgun family has not made the full payment for his successful hit. So he is out to take revenge.

And the novel follows the many experiences that both of them have in the Mumbai underworld. “However, both achieve their aims in a limited manner,” says author John. Nevertheless, the scenes depicted are so vivid and alive that it is a bit of a surprise to know John has had no contact with the criminal elements in Mumbai.

“Most of the research was done on the Internet,” he says. “I avoided reading the good books on the underworld, like Suketu Mehta’s Maximum City, and Gregory David Robert’s Shantaram, so that I did not get limited in my imagination.”

John also clarifies that the Don portrayed in his novel is not at all like Dawood Ibrahim or Chhota Rajan. “Most of these underworld gangs have religious or community affiliations,” says John. “So Dawood has a Muslim-only gang, while Chhota Rajan runs a Hindu gang. But the Don in my book does not have any such compartmentalisation. His gang has members of all religions, cultures and communities. I tried to keep out of the stereotypes.”

There are incidents set in Kerala, highlighting the early life of Ranjit Cherian, vignettes from the National Defence Academy, the pleasures of flying, scenes set in Kashmir, Goa and Thailand, the life of criminals in Mumbai, illegal organ harvesting, the activities of the beggar mafia, the experiences of a starlet who becomes the mistress of a criminal, and encounters with Israeli women tourists.

The writing is smooth and fluent. And John has a natural talent for story-telling. He might have inherited this trait from his late father, PR John, a Thiruvananthapuram-based bureau chief of a vernacular newspaper. “As a child I would see him walk up and down in his room at night and sometimes talking to himself,” says John. “I believe my father was framing the story that he was planning to write the next day. Surprisingly, I too have the same habit, although I do my thinking sitting down.”

But by profession John spent 38 years in the Indian Air Force and reached the post of Air Vice Marshal. He had done stints in places as varied as Jamnagar, Jodhpur, Bareilly, Hyderabad, Tezpur, Gwalior, Delhi, and Bagdogra. “I also had a three-year stint in Bangkok, as a Defence Attache attached to the Indian embassy,” he says.

Following his retirement in 2010, he had a lot of time on his hands. That was when he thought he would try his hand at writing. “I wrote in fits and starts,” says John. “There were days when I would not write. And there were other days when I would write a lot. This is probably not the best way to work.”

Perhaps that is also why he took four years to finish the book. “Thereafter, I sent it to my daughter and son-in-law who gave me some suggestions,” says John, who did make some changes. The novel is published by Notion Press and is priced at `295. It is available on Amazon, Flipkart, Bookadda, and Infibeam.

“Thanks to the positive reactions, I am planning to write a sequel,” says John.

(The New Indian Express, Kochi and Thiruvananthapuram)
at June 12, 2015