Telling Jokes On The Set 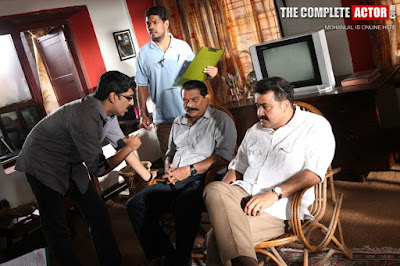 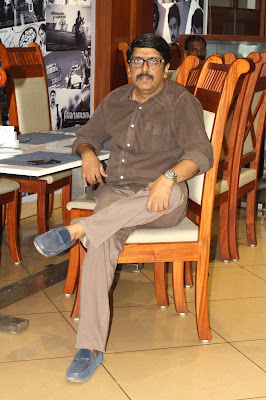 Director B. Unnikrishnan talks about his experiences in the films, ‘Grandmaster’ and 'Pramani'

Director B. Unnikrishnan was taken aback. On the set of his film, ‘Grandmaster’, at Kochi, on March 9, 2012, the final day of the shoot, veteran actor Jagathy Sreekumar told Unnikrishnan he wanted to dub his voice by using the rushes as a reference. “Usually, the dubbing is done after the first edit,” says Unnikrishnan. “But Jagathy told me he wanted to finish it.” And so it was done.

It had been an enjoyable shoot. What Unnikrishnan like the most was the good-hearted teasing that took place between superstar Mohanlal and Jagathy.

And he gives an example. “Jagathy had a particular habit,” says Unnikrishnan. “After lunch, he would always take a nap for half an hour. Once, we were shooting at Cherai beach. And, immediately, after lunch, Jagathy went to sleep in a room at a nearby house. Mohanlal saw Jagathy sleeping through a window.”

The star then borrowed a phone and called up the production executive, Mani (name changed). He changed his voice and said, “I am calling from another location. I need to talk to Jagathy immediately.”

Since Jagathy does not keep a cell phone, Mani took his mobile, went into Jagathy's room, woke him up and said, “Sir, there is a call for you.”

When Jagathy took the phone, Mohanlal said, “Sir, can I tell you an interesting joke?” And they both burst out laughing.

There is a back story to this. Mohanlal was working with Jagathy in ‘Naran’ (2005), a film directed by Joshy. They were shooting late at night, somewhere in Tamil Nadu, when a tall and broad-shouldered man approached the duo and said, in Tamil, “Excuse me.”

Both of them thought he was an important person.

The man paused and said, “Can I tell you an interesting joke?”

They found it weird and ignored him.

“Ever since that day, during the 'Grandmaster' shoot, whenever Jagathy would be resting between shots, Mohanlal would come up from behind and say, 'Can I tell you an interesting joke?’” says Unnikrishnan. “Even though Jagathy was always serious and sombre between takes, Mohanlal had the ability to make him laugh.”

On that last day, Jagathy approached Unnikrishnan and complimented him on the film. “Thereafter, he came for the pack-up party, which he usually never does. He then informed me that he would have to travel through the night to reach Kodagu (in Karnataka), where a shoot of Lenin Rajendran’s ‘Idavappathy' was taking place,” says Unnikrishnan.

Unfortunately, during the early hours of March 10, the vehicle hit a median on National Highway 17, at Tenhipalam, in Malappuram district. Jagathy suffered serious head injuries from which he has not completely recovered. “Looking back, if Jagathy had not done the dubbing, before he left, it would have been difficult for me to release the film,” says Unnikrishnan.

In another experience, on the set, 'Pramani' (2010), a young girl was appointed to play Fahadh Faasil's sister in the movie. “She was a bubbly and high-spirited girl,” says Unnikrishnan. “But all of us always treated her like a child.”

She interacted with everybody, except for Fahadh, who, true to his introvert nature, kept to himself. “She had acted with Mammooty in 'Palunku' [directed by Blessey],” says Unnikrishnan.

So, it did come as a complete surprise, when Unnikrishnan was invited to Fahadh's wedding reception, on August 21, 2014, at Thiruvananthapuram, and came to realise that the young girl on the 'Pramani' set had become Fahadh's wife.

"I jokingly reminded Nazriya [Nazim] that she first met Fahadh on the sets of my film,” says Unnikrishan. “She gave me a shy smile.”

(The New Indian Express, Kochi, Thiruvananthapuram and Kozhikode)
at August 11, 2016