Usha Uthup to sing in honour of Mother Teresa at Rome 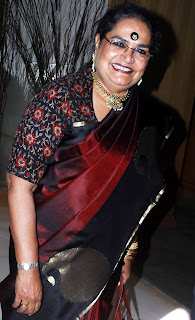 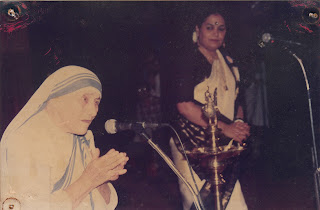 Whenever singer Usha Uthup would perform, during the functions of the Kolkata-based Missionaries of Charity, singing classic hymns like 'Amazing Grace’ and ‘Abide with me’ she would also sing the 1970s hit pop song, 'Beautiful Sunday'. “Mother Teresa liked it a lot,” says Usha.

Thoughts of Mother Teresa are suffusing Usha's mind, as the former's canonisation, on September 4, at the Vatican, looms closer. Thanks to a special invitation from the Missionaries of Charity, as well as the Vatican, Usha will be attending, along with her son Sunny. Incidentally, Usha had been at St Peter’s Square, on October 19, 2003, to attend the beatification ceremony of the nun. While there she also received a personal blessing from Pope John Paul 11.

Meanwhile, on the evening of September 3, Usha will be singing at a function, at Rome, which will be honouring the life of Mother Teresa.

“When Mother Teresa died [on September 5, 1997], I wrote a song called 'The Poorest of the Poor',” she says. “This song was sung throughout the four days her body was kept for public viewing, at Loreto House, Kolkata.”

Here is a sample of the lyrics:

'You filled their hearts with love and peace,
Oh Mother, Mother Teresa,
You loved and gave them reason to live,
You gave your life for the poor,
For the poorest of the poor.'

At the Rome function, Usha will be singing this song as well as a Bengali song.

It will be an act of affection by Usha. Because she had known Mother Teresa for 47 years. “I became close to her because of her charismatic personality,” says Usha. “She was kind, merciful, and had a nice sense of humour. She also had unbelievable inner strength. What I liked was that she did not preach religion. In fact, she only talked about the brotherhood of man.”

And the Mother would offer advice to Usha, as she went through the ups and downs of her life. “She would also tell me, 'My child, bring a smile to everybody's face, with your singing,'” says Usha.

For the singer, Mother Teresa was already a saint when she was alive. “But this canonisation is so huge,” says Usha. “Where does it happen in our lifetime? To walk, talk, sit with somebody, have a cup of coffee, and, later, see her canonised! How many people are fortunate to see something like that? I am so grateful to God for this.”

(The New Indian Express, Kochi, Thiruvananthapuram and Kozhikode)
at August 20, 2016