Working With His Hands 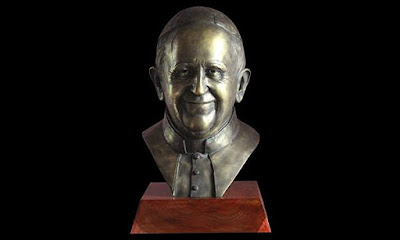 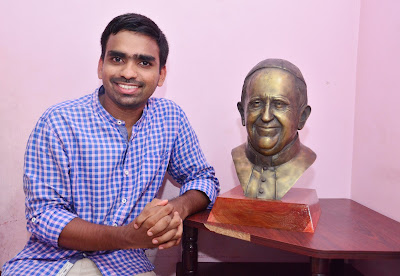 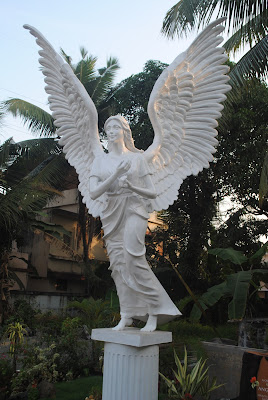 Every now and then, George Francis would read articles on Pope Francis. Sometimes, he would watch him on TV. And gradually, an admiration grew within him.

“There are many Popes who have shied away from difficult subjects, but Pope Francis has always tackled them with courage, including the sexual abuse of children by priests,” says George. “Also, he seemed to be a man of kindness and friendship. I became a fan. One day, there arose a desire in me to do a real-life image of him.”

At his home in Tripunithara, George made a clay model, and, from it, a silicon mould. Then he poured wax on it. After it had dried, he took it to Harikrishnan, a bronzesmith, who lives in Piravom. There, it was wrapped in clay for a week. Thereafter, it was heated.

“When that happens, the clay becomes hard, while the wax melts,” says George. “It was on the clay that the molten bronze is poured.” The end result is a one-foot high bust, which weighs 23 kgs. It is striking how real the Pope looks. “I used sandpaper to polish the model,” says George.

It took six months for George to finish the work because he worked only on the weekends. That's because he is working as a Creative Lead, at Kochi, for a Singapore-based IT company. But when the company came to know about his sculpting skills, they changed his timings. “Now, my office time is from 12 to 9 p.m.,” says George. “Hence, I am able to work on my sculpting from 6 to 11 a.m.”

Sculpting is, indeed, a passion for him. But the Pope is not his first work. While he was studying for his degree in advertising, at the RLV College of Music and Fine Arts, his friend, Vincent Variyath, the parish priest of the St. Sebastian church, at Kochi, asked him to make an angel for the cemetery.

So, George began to think about it. “I felt that the speciality of angels is that they have such large wings,” he says. “So I decided to make a wing span of 14 ft., while the angel has a height of 8 ft.”

George used cement for the body and fibre for the wings. “The angel is standing on his toes, because I wanted people to have a 'wow' feeling,” says George.

And indeed, you do get a wow feeling when you look at the work. And George, too, experienced a wow feeling on the personal front. He would take drawing classes for children at the church. There, he met the Catechism teacher Amritha. They became friends. Soon after, they fell in love. The duo got married two years ago. Amritha has just completed her M. Phil from the Cochin University of Science and Technology.

Interestingly, the impulse to work with his hands came from his own father, who was a mechanic. “I would help my father every now and then,” he says.

Meanwhile, George has an unusual definition of his talent. “I am the medium that allows God's creativity to come through,” he says. “When I made the angel, at one point I fell stuck. But when I continued to work hard, the magic happened, and it all came through well. So, it is not my own skills. I feel I am a tool of God.”