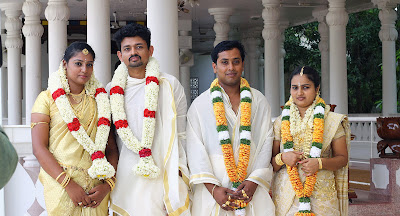 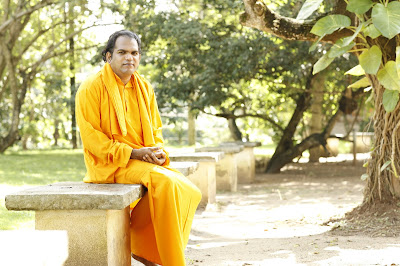 The Santhigiri Ashram, at Thiruvananthapuram, which does not believe in caste, creed or religion, promotes inter-caste and inter-religious marriages

By Shevlin Sebastian
On a cloudy morning in June, C. Jino Jose, along with VS Manjula, enters the ‘Sahakarana Mandiram’ or the ‘Shrine of Togetherness’ at the Santhigiri Ashram in Thiruvananthapuram. This is a holy abode and is situated right next to the Lotus ‘Parnasala’ where the physical remains of the founder Navajyothisree Karunakara Guru (1927-1999) are kept. The couple stops in front of the abode’s altar. Then Jino and Manjula bow their heads. Later, they go to one side and bring back a tray, which contains fruits, two garlands, as well as a lighted lamp.
This is placed on a table in front of the altar. At one side, a few sanyasis chant verses from the Skanda Purana. “These verses urge the pair to have a good life, and to share the good and bad together, and to live a life as per the Guru's teachings,” says Ashram Organizing Secretary Swami Gururethnam Jnana Thapaswi.
After Jino and Manjula exchange garlands, in front of several saffron-clad sanyasis, they go to one side, where family members, relatives and friends, stand in a queue to throw flowers and chant the Guru Mantra.
After that, they are led back to the altar where more prayers are recited. “The marriage concludes in the presence of the Guru,” says long-time devotee Rajeev Devraj.
And thus, one more inter-caste marriage has been concluded at the ashram. While Jino, 28, is a Christian, Manjula, 24, is a Hindu. He had seen her when they were studying at the Mar Ivanios College at Thiruvananthapuram, both doing different degree courses.

“I liked her character,” he says. “Manjula is sincere, simple and down-to-earth. Although we belong to different religions, we are similar in many ways. So I felt that religion will not be a problem. Manjula also said that she has no problem in accompanying me to church.”

Jino first received the permission of his own parents before he approached Manjula's father J. Velayudhan Chettiyar. “The Guru has taught us never to look at caste, creed or religion,” says Velayudhan. “All human beings are the same. I have lived in the ashram for forty years. Manjula has also spent all her life here.”
Velayudhan then approached the Guru Apparent, Janani Amritha Jnana Thapaswini, who, after meditation and prayer, gave the go-ahead. “Janani Amritha takes guidance from the guru, looks into the soul of the couple, and sees whether they are compatible,” says Swami Gururethnam.
Incidentally, there are two more marriages scheduled for that morning. Anil Kumar weds Asha, but both belong to the Nair caste. On the other hand, NR Dinakaran, who belongs to the Ezhava caste, gets married to Krishna Chithra, a Nair.
On an average there are 15-20 marriages conducted every month at the Ashram. “The majority are inter-caste and inter-religious ties,” says Swami Gururethnam. “It is not that all marriages work out well. Sometimes, problems arise. So, we encourage them to come to the ashram, pray to the Guru, and take our help to sort things out.”
Meanwhile, the ashram's overall aim is to reach a situation where nobody asks about one's caste or religion while fixing a marriage. “That has been the dream of Navajyothisree Karunakara Guru,” says Swami Gururethnam. “And we want to achieve it.”