The Face As Inner Mirror 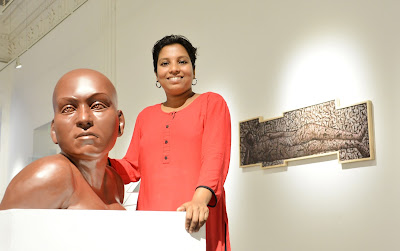 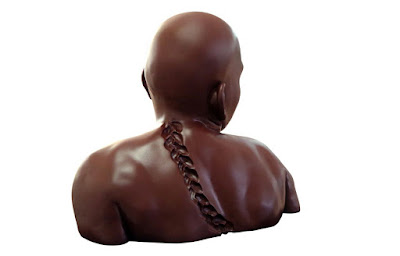 Artist PV Nandan stares intensely at EG Chithra's sculpture, a self-portrait. “The eyes look sad, but the lips are determined,” he says. “There is a coiled energy in the face.” He caresses the bald head, which is on display at the 'Time Devoured' exhibition, held recently, at the Durbar Hall Art Gallery in Kochi. “It is an impressive work,” he says. “Although there are very few women sculptors in Kerala, Chithra is one of the best.”

Chithra's work, titled, 'Yes, I believe that this is something special', has a back story. At 6 p.m., on March 26, last year, she walked into the Aspinwall House, at Fort Kochi during the Kochi Biennale. Chithra was wearing a floor-length maroon gown, held an empty earthen pot in her hands, and had three dolls hanging on her back. She reached an area where a circle had been marked, with white chalk, on the ground.
Chithra went to the centre, and sat on the upturned pot. Then she closed her eyes for a few moments. Several spectators, many of them foreigners, gazed at her in silence. The screech of a parrot and the cawing of crows could be heard. Chithra stood up, took out a pair of scissors, and proceeded to cut her hair. Soon, thick lockets fell to the ground.

“I am a person who has a lot of baggage from the past – a victim of social conditioning, brainwashed religious beliefs, unmet expectations, and intense anxieties,” says Chithra. “As a result, my real self was buried deep within myself. Through this performance, [called 'Abrecation', which is a psychoanalytical term, for reliving an experience in order to purge it of its emotional power], I wanted to move towards freedom.”
Later, her friends helped her to become completely bald. “After doing the performance I felt an immense self-confidence,” says Chithra.

A few months later, she got the idea of doing a sculpture of her bald head. To make it,Chithra did a life-size drawing on paper, by looking at the photo taken by her husband on his mobile phone. Then she made a two-feet high metal structure. Thereafter, wet clay was pressed onto it. “I did the detailing of the face at this point,” says Chithra, 30. Soon, a mould was made, using Plaster of Paris, and this was cast in cement. Finally, with the help of a spray gun, the chocolate colour was applied to the face.
Interestingly, on the back of the sculpture, there is the embedded mark of a plait of hair. “I just wanted to say that whatever happens in life, whether good or bad, it leaves a permanent mark on you,” says Chithra.

She is also making a mark with her works. But the artist stumbled on to sculpting by accident. When she applied to do a course in painting at the RLV College of Music and Fine Arts, in the suburb of Tripunithara, there were no seats. Instead, there was an opening in sculpture. So she opted for it and was able to complete the four-year course.

“I discovered that I enjoyed sculpting,” she says. “It has given me so much of pleasure. This could also be a subconscious reminder of my father, who works as a carpenter. Maybe, that's why I also enjoy working with my hands.”

But life is not easy for this full-time artist, whose husband is a painter. “There are only a handful of artistes in Kerala who can live by selling their works,” she says. “The works of painters are not selling, so you can imagine the plight of sculptors.”

She has been able to make ends meet by being an occasional lecturer on art at different colleges, including her alma mater, RLV College. Thus far, Chithra has done about fifteen sculptures. One eye-catching one is of a woman lying supine, in mid-air, with her long flowing hair pointing towards the ground.

Most days, both husband and wife work in a rented studio at Fort Kochi. “I am living my passion, so I am happy, no matter the difficulties,” says Chithra.