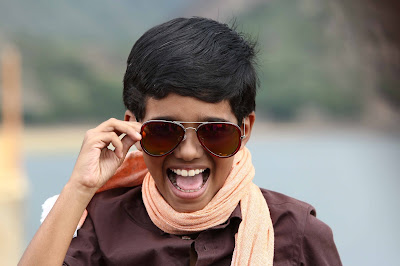 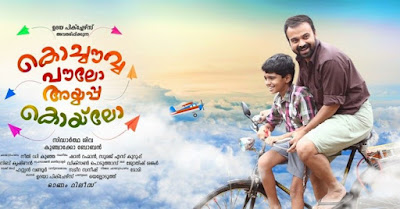 Photos: Rudraksh; the poster of the film

On the sets of 'Kochavva Paulo Ayyappa Coelho', recently, child actor Rudraksh, aged 10, was running about, in the forest, at Perumbavur, along with his co-child actor Abeni Aadhi. But when they returned, Rudraksh's father, actor Sudheesh, saw that he was bleeding on his right foot. When the blood was washed away, two puncture marks of a snake sting could be seen clearly.

Panic gripped the sets. Rudraksh was taken to a nearby doctor who suggested that he be taken to the Little Flower Hospital in Angamaly, 16 kms away. The doctors there could not identify the injury. After numerous blood tests, it was concluded that no poison had entered the bloodstream.

This was the only hiccup in a smooth 58-day shoot. And Rudraksh's acting in the well-received film has been just as smooth. He plays Ayyappa Das whose dream of flying in a plane, is stymied, first, by him contracting chicken pox during the summer holidays, and, secondly, by the untimely death of his West-Asia-based father, in an accident.

But the one who inspires Rudrakash, to fulfill his dream, is the village swimming instructor Kochavva (played by actor Kunchako Boban), who is himself inspired by the best-selling book, 'The Alchemist', by Brazilian writer Paulo Coelho.

Young director Sidhartha Siva had one major condition for Rudraksh to play the part: he had to learn swimming. So the Kozhikode-based boy quickly learnt it at a nearby pool. “Thereafter I practised for three months,” says Rudraksh.

On the sets, in order to avoid confusing the child, Sudheesh told his son to only follow Sidhartha's suggestions. “Sidhartha Uncle told me that at all times I should think about the character,” says Rudraksh. “He told me to understand my relationship with my parents, elder brother and grandparents.”

Rudrakash did so and has been lauded for his performance. In fact, after a few minutes of seeing the premiere show, Sudheesh forgot that it was his son who was acting. “He is a natural talent,” says Sudheesh.

A Class five student of the Silver Hills higher secondary school, Rudrakash received a lot of support from his principal, teachers and classmates. Because the shoot took so long, in different places in Kerala, he had to rely on his friends to share their notes with him. “Later when they saw the film, they liked my performance,” says Rudraksh. “Some of them have seen the film a few times.”

Asked about his future plans, Rudraksh says, “Once I finish my studies, I would like to become an actor.”