The Garrulous And Articulate Indian 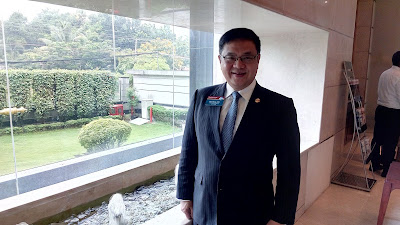 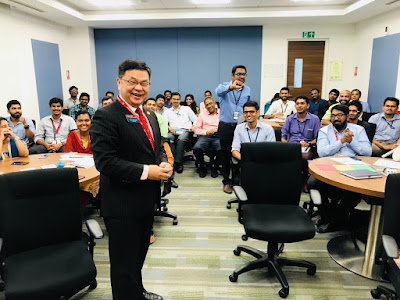 Derek Wong, International Director of Toastmasters International, on a recent visit to Kochi talks about the qualities of Indians as speakers and as a people

Photos: Derek Wong; with the participants of the District 92 Toastmasters Annual Conference

Derek Wong, International Director of Toastmasters International, arrived at midnight in Kochi from Hongkong following a 15-hour flight. He was feeling jet-lagged. At the hotel, he was given an entry card and Derek went to the room and slept.

And the next morning, when Derek went for breakfast, the same person remembered his name as well as his room number. “This was very impressive,” he says. “It was good hospitality. In many countries of the world, the people would not have behaved with this sort of magnanimity.”

Derek had come to Kochi to attend the District 92 Toastmasters Annual Conference. As an International Director, he oversees the activities of India, China, Japan, South Korea, and Taiwan. And he was very impressed when he attended a meeting of one of the clubs at Kochi.

“All the speakers were so well prepared,” says Derek. “They knew exactly how to convey the message in an effective manner. Even an engineer spoke very well. Normally I fall asleep when engineers speak.”

A strength of the speakers in India is their dynamism when it comes to delivery. “They use a lot of hand gestures.,” says Derek “Indians know how to express a point in a concise manner and attract the audience.”

Another striking aspect is the fluency in English. “Indians are very good speakers of English,” says Derek. “They have a good vocabulary, grammar and pronunciation. That's because they receive a good training at the school level. So that is the great advantage they have.”

After attending regular meetings in India Derek has observed that leaders have a way to handle conflicts. “People want to express their opinions, not only in India but all over the world,” he says. “But in India, they allow all the people to express what is on their minds. And once they hear all the opinions, the district officers try to find a way to handle it. They do it in a way that ensures the people don't get angry or irritated.”

In some countries, only one or two people will air their grievances. “They prefer to do things according to what the chairman says,” says Derek. “South Korea and Japan have a free society, but they are a little bit more obedient. They tend to voice their complaints in private.”

Derek is fascinated at the different types of behaviour across countries. For example, he has a hard time understanding accents. “When I visit Japan the English spoken is completely different,” says Derek, who works as a Chief Financial Officer for a private company in Hongkong. “I find it difficult to understand what they are trying to say. They use the Japanese accent a lot when they speak English. I have to listen patiently. But they also told me they find it difficult to understand my Chinese accent. So, it is all very complicated.”

But Derek is a fan of the Japanese. “Nobody can match them when it comes to punctuality,” he says. “So, if a programme is supposed to start at 10 a.m., it will not start at 9.59 or 10.01. Instead, it will start at exactly 10 a.m. When it is 30 seconds from 10 a.m., all of a sudden the hall will fall silent. Then they will watch the second hand. Then on the dot of 10 a.m., the meeting starts. That is the precision with which they live their daily lives.”

As for China, the people who join Toastmasters are mostly the young. “They are doctors, lawyers, engineers, accountants, and entrepreneurs who want to improve their communication skills. That is why Toastmasters in China is quite popular,” says Derek. “It also gives them an opportunity to learn to speak English well especially when they are dealing with international visitors.”

(The New Indian Express, Kochi and Thiruvananthapuram)
at June 18, 2018