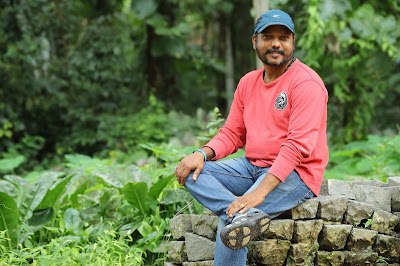 In Joshiy's film, ‘Runway’ (2003), the hero Dileep smuggles spirits through the Walayar check-post. Since the crew did not get permission to shoot at the check-post, art director Joseph Nellickal replicated the original near the railway station at Kalamassery.

“We felt the space was similar to the area around Walayar and made the set,” he says.

But one day, when Joseph reached the set at 6 a.m., he noticed a lorry with a Tamil Nadu registration number which was parked there. “Suddenly, I saw the driver give a slap to the helper,” says Joseph. “So, I enquired about what had happened.”

The driver said that he had crossed the Walayar check post by 3 a.m. Thereafter, he told the helper to drive the vehicle while he had a nap. But when the driver woke up, he saw that they were still at the check-post. So he thought that his assistant had gone around in circles and returned to the check-post. That was why he was slapping the driver.

“So I told the driver that this was a film set,” says Joseph. “He just could not believe it. He went around and inspected everything and noticed that there were some sacks in the area where the office was supposed to be. That was when he finally became convinced. This was a case of where the set was so realistic that people could not distinguish the real from the fake.”

Something similar happened in the film, ‘Robin Hood’ (2009). There was a scene in which Prithviraj had to enter an ATM and draw some money. “In those times, the ATMs had not become popular,” says Joseph. “So I made one.”

However, as they were busy setting up the set, unknown to them, a well-to-do man entered the booth. “He thought it was an actual ATM and put his card inside the holder,” says Joseph “But it got stuck.”

So, firstly the man had to be told that it was a fake ATM counter. Secondly, the entire structure had to be dismantled so that the card could be returned to the man and the recorder could be fixed again. “The shoot was delayed by several hours before we could get the ATM ready again,” says Joseph.

There was a crisis of a different kind on the sets of the film ‘Anwar’ (2010). The location was at the Cochin University of Science and Technology (CUSAT). A set was built in front of the main university building. Prithviraj entered a corridor, placed a bomb and left. “This was a powder bomb and not one that caused a fire,” says Joseph. “Just behind the set, there was a window of the main building. But under the impact of the blast, the window burst open. All the powder entered the room.”

It was valuation room where all the answer sheets were kept. The tables were covered with black powder, including the computers and the answer sheets. The Registrar came running. When he saw the scene, he began perspiring. “He felt that he would lose his job,” says Joseph. “I assured him that we would clean the entire room.”

Joseph’s team which consisted of ten people along with a couple of CUSAT employees cleaned every paper, computer and table. The shattered glass was replaced. “We worked through the night and finished by 6 a.m.,” says Joseph. “We had to ensure that nobody came to know about it, otherwise, it would have become a major issue.”

During the shoot of the film, ‘Lion’ (2006), an issue of a different kind cropped up. In the storyline, there was a shootout between some policemen and goondas on the Venduruthy Bridge at Kochi. A couple of policemen shot at the miscreants. Two of them were supposed to fall from the bridge into the water. “We made dummy figures, with them wearing shirts and mundus,” says Joseph. “They were thrown from the bridge and floated away.”

However, on the same day, at 2 p.m., a man jumped from the Kumbalam bridge and drowned. The police could not locate the dead body. “Suddenly somebody noticed one of the film's dead bodies floating past,” says Joseph. “So they informed the police. They got some divers to bring the body to the shore. The parents were called to identify their son. But when the body was inspected, it was realised that it was a fake, leading to much embarrassment for the police.”

Joseph came to know about this when an item appeared in the next day's newspaper: 'Fake body proves to be a problem for the police'.

Then in ‘Naran’ (2005), it was the case of a fake tree made of fibre. It was being transported from Hogenakkal, Karnataka, where one schedule was over, to Thiruvananthapuram.

At the Tamil Nadu-Kerala border, the lorry was allowed to go through since it belonged to a film crew. But as the vehicle went past, inspectors saw a tree sticking out from the back. So they gave chase.

“The driver was abused and asked to get down,” says Joseph. “The Forest Department officers said that he was smuggling wood into the state. But the driver stated that this was not an actual tree. They did not believe it. Then an officer climbed into the truck and it was only when he knocked on the tree that he realised it was not made of wood, but fibre. So they were allowed to leave."

Not surprisingly, the driver smiled silently at his helper.

(The New Indian Express, Kochi, Thiruvananthapuram and Kozhikode)
at June 27, 2018