Boom in China, lessons for India 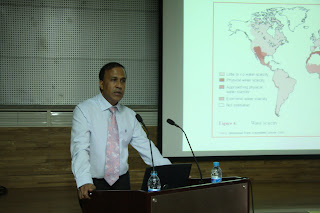 A Kerala-born Australian professor, who lectures in China several times a year, compares the rising superpower with India

In the city of Hangzhou, 180 kms from Shanghai, there were four universities comprising engineering, medicine, agriculture, and a graduate course. One day, in 1998, the Chinese government decided to amalgamate all four and construct one big institution: the Zhejiang university. It would have been a difficult task since there were farm lands all round.

“However, all the land in China belongs to the government,” says Kodungallur-born Dr. Kadambot Siddique, who is Chair in Agriculture and the Director of the UWA Institute of Agriculture at the University of Western Australia. He is also a visiting professor at Zhejiang and four other universities in China.

Firstly, the Government built two-storeyed terraced houses for all the displaced farmers. Then they were promised jobs in the university and other institutions. The university was built in less than a year, in an area of 1000 acres, and cost $300 million. Today, there are 42,000 students. It is now one of the leading universities in China, with a growing international reputation.

“That is China for you,” says Siddique. “If the government wants to make a university, a highway or a dam, they will do it. Nobody can resist, but they will always compensate the people.”

On May 4, 1998, the then President Jiang Zemin announced that China will set up a ‘number of top-class universities at the international level’. Thus was born the C9 League. “These are the top nine universities in China,” he says. The government managed to secure the best Chinese talent internationally by offering attractive salaries and world-class facilities.

Apart from education China has built the most modern airports and the best highways in the world. “There are three, four, six, and eight-lane highways,” says Siddique. “And these quality highways are there all over China, including the rural areas. They have a fantastic telecommunication system. The hotels are world class. The capital, Beijing, is such a beautiful city. There are 14 ring roads and a wonderful subway system. They are miles ahead in infrastructure, space, nuclear and bio-technology, and the health sectors.”

What helps is that the people are well disciplined, hard-working and punctual. “If they say a programme will start at 10 a.m., it begins on the dot,” says Siddique.

He gives another example. “In China, official dinners start at 6.30 p.m.,” says Siddique. “There will be a ten-course meal, but at exactly 8.30 p.m., the dinner will stop and the people will say goodbye and go home.”

Siddique says that India, with its GDP of $1285 billion, is lagging far behind. “The higher education sector is in poor shape,” he says. “There is no university which has reached the international benchmark of Harvard or Stanford. The curriculum is old and out-dated.

“Everybody is spoon-fed. Overall, the education system does not foster independent thinking, creativity and leadership. If there are 50 students in a class, we should regard them as 50 individuals, and not collectively as a batch.”

What has caused this mediocrity is the non-emphasis on merit in Indian society. “In India, the Vice Chancellor of any university is a political appointment,” says Siddique. “It is time to use talent as the basis for selection.”

Siddique says that in India the priorities are different. “We waste so much time and money on gold, clothes and marriage ceremonies. We don't work as hard as the Chinese. As a result, our productivity is low. We lose so many days due to hartals and bandhs. I have lived 30 years in Australia and not a single day has been lost to a bandh or hartal. The same is the case in Communist China also.”

When Siddique came for a week to Kerala, recently, he lost two days because of hartals. “People abroad have strong political views, but that does not mean that they will close down society for a day,” he says.

He is disappointed by the state of Kerala society. “I observed a lot of environmental problems,” he says. “Everybody is dumping garbage all over the place. The disposal of waste products is not done properly. The municipal services are poor. The roads are in bad shape.”

Siddique is worried about the impact of climate change. “Kerala has such a long coast,” he says. “We could suffer from rising sea levels. But nobody is talking about it. It is time for the people of all political parties to sit together and chalk up urgent strategies and a long-term vision.”