War, minus the shooting! 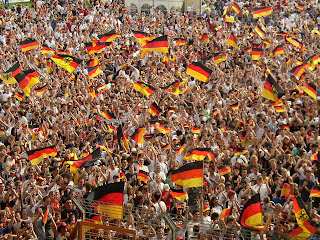 World Cup football as a metaphor for life

Photo: Germans celebrating their country's win over Argentina in the quarter final of the World Cup football tournament in South Africa, 2010

When Uruguay, the last South American side, went out of the World Cup, our hearts were truly broken. It is going to be an all-European final on Sunday. Brazil, Argentina, Paraguay, Chile, and Ghana: by losing they made us bleed. Why do we Indians root for these countries? It is primarily because their football is free-flowing and magical.

When Lionel Messi of Argentina is given the space to move around, his ball control is dazzling. The 'zero angle' goal that Brazilian right-back Maicon scored against North Korea was breathtaking.

There is a joy which one experiences in the face of such wonderful skills, shown especially by the South Americans. Then you remember the tough backgrounds that most of them came from. Argentine forward, Carlos Tevez, like the great Diego Maradona, grew up in a crime-ridden neighbourhood in Buenos Aires. Both surmounted formidable hurdles to make a mark on the international stage.

On the other hand, look at the Europeans. They are born in wealthy countries. They have access to good playgrounds and quality equipment from their childhood. They eat the best food and learn from top-quality coaches. They play in the richest leagues in the world. But, unfortunately, when it comes to mesmerising God-given talent, somehow, it is lacking. Sure, there are exceptions like Portugal’s Cristiano Ronaldo and Holland’s Arjen Robben. But, by and large, Europeans have a workmanlike quality. To win, therefore, they have to use other methods.

During the quarter-final between Argentina and Germany, at Cape Town, we saw how the free-flowing creative skill of the South Americans was stymied by clever strategy, indomitable will power, and bloodlust of the Europeans.

Yes, there was an unmistakable bloodlust on the face of the injured former German captain Michael Ballack, who raised his arms to the sky and shouted from the sidelines, when Germany scored the fourth goal against Argentina.

You saw it on the face of the manager Joachim Loew, as well as the dainty Chancellor of Germany Angela Merkel who danced with glee in the VIP enclosure, as she viewed the clinical destruction of Argentina.

This match created a moment of introspection. Should we follow the Eastern way, of treating life like a river and going along with the flow, which is what the late spiritual leader Osho had suggested, or should we follow the European method: have aims and goals, plan your strategies, and be ruthless. Kill to win!

This approach allowed the Europeans to pillage the world for the past millennium and it kept our nation in shackles for more than two hundred years. They looted and mauled our country, destroyed home-grown industries, and impoverished the people. More than sixty years after Independence we are still struggling to recover our self-esteem.

A football match is also a metaphor for our daily lives. You are moving in society, showing good skills, but there are people lurking about, at the side, in front, and at the back, who are ready to trip you. You dribble past one, two, and even three oppressors, but it is inevitable that you will get tripped, and fall. But you stand up again, but the attempts at tripping continue. Sometimes, those who do the ‘paara’(Malayalam word, for tripping) are exposed. They are shown the red card, and asked to leave the field.

But the dilemma continues: what does one do when faced with non-stop aggression? Keep calm and work your way around the antagonist? Or kick back at the foe and risk the danger of getting a yellow or a red card?

There are no clear-cut answers because life is messy, just as when a player moves forward with the ball, he faces messy situations. But here is how writer George Orwell analysed the game of football, and, in an indirect way, life: “Sport has nothing to do with fair play. It is bound up with hatred, jealousy, boastfulness, disregard of all rules and sadistic pleasure in witnessing violence: in other words it is War Minus The Shooting!”