‘The ways of God are incomprehensible’ 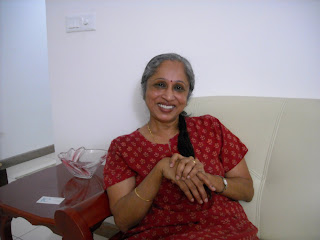 Says Lakshmi Ramachandran, the dean of the Global Public School


When Lakshmi Ramachandran, the dean of the Global Public School, gets up in the morning the first thing she says is, 'Thank you, God, for giving me this day.' She adds, “I genuinely believe every day is a present.”

Thereafter, after a bath, she stands in front of an alcove which contains the photos of Guruvayurappan, Lord Krishna, Shiva, Devi and Saraswati and recites a few shlokas, including the Sarasawti Vandana.

Here is a translation from the Sanskrit: "May Goddess Saraswati, who is fair like the jasmine-coloured moon, and whose pure white garland is like frosty dew drops; who is adorned in radiant white attire, on whose beautiful arm rests the veena, and whose throne is a white lotus; who is surrounded and respected by the Gods, protect me. May you fully remove my lethargy, sluggishness, and ignorance."

Sometimes, Lakshmi speaks to God. “The minute I connect with Him, I feel an energy come into me,” she says. “It is this energy that lubricates all my relationships. I also feel that my happiness gene comes from God.”

Thereafter, the ever-smiling Lakshmi reads a book of daily thoughts and prayers brought out by the Ramakrishna Math. And one of the phrases she read recently was about how all human beings are connected with one another. “If we look inward, we will be able to see the divine spark within oneself, and the divinity in others,” she says.

To get in touch with this divine power, Lakshmi goes to the Ernakulathappan Shiva Temple often, usually in the evenings. “I am enchanted by the numerous lights,” she says. “There is a special aura of stillness and tranquility.” These visits remind Lakshmi of her childhood and the numerous occasions when her mother would take her to the temple. “She would hold my hand, and teach me how to pray and acknowledge the presence of God,” says Lakshmi.

Unfortunately, her mother, Saraswati, died of ovarian cancer in 1978, when she was only 52. “I asked God why He took her away at such a young age?” she says. “I was consumed by pain.”

Years later, she read a book, “Autobiography of a Yogi' by Paramahansa Yogananda. “He spoke about the different realms that exist, where the souls reside,” says Lakshmi. “After reading it I was convinced that there is a life after death and my mother is alive.”

But death continued to haunt Lakshmi. Her two brothers died prematurely, under different circumstances. “I was traumatised,” she says. “But it did not make me bitter. And that is God's gift to me. There are many things in life which we will never understand. The ways of God are incomprehensible.”

So what is her image of this incomprehensible God when she closes her eyes? “It is a beautiful white light,” she says. “When I see it, I am filled with joy and peace.”

Asked to explain how God plays a role in her life, she tells a story. She had been working as the founder-principal of the Millennium School in Dubai. After a few years, she decided to return to Kochi. So, she put in her resignation papers. “I had no plans to work again,” she says. “My husband was badgering me to be footloose and fancy-free, so that we could travel.”

But it was at this moment that she got a call from the promoters of the Global School, offering her the position of dean. “This was clearly the intervention of God,” says Lakshmi. Incidentally, the Global School, which began, five years ago, with 60 children, now has 1200 students.