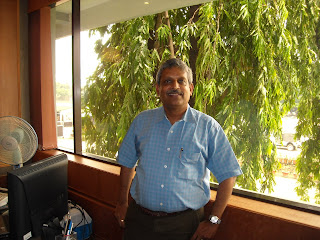 E. Nandakumar, executive director, has ensured that the Kochi Refinery is a top-class facility

Here are some facts about the Kochi Refinery: It has a capacity to refine 9.5 million tons of oil a year. This works out to 2 lakh barrels a day. The annual turnover is Rs 26,000 crore. The number of employees is 1950. And the total area is 1200 acres at Ambalamugal.

The man who presides over this is E. Nandakumar, executive director. And he answers with cordiality the one worry that those passing by the refinery have: atmospheric pollution. “Around 2000 tons of fuel is burnt every day,” he says. “The refinery emits 14 times that much into the atmosphere as exhaust. But look at the smokestacks.”

He points through the large glass-paned windows of his first-floor office at the smokestacks. Indeed, there does not seem to be much smoke being emitted. “It is clean,” says Nandakumar. “The company has spent a large sum of money to ensure that the burning of the oil is perfect. It goes into the atmosphere as carbon dioxide or water.”

However, about 20 per cent are greenhouse gases which contribute to global warming. Nandakumar says that energy conservation measures are being implemented continuously for its reduction.

The executive director is a man who cares for the environment. At one corner of the campus, there was a scrap yard. “The scrap had piled up so much over the years that we could not see the neighbouring FACT premsies,” says Nandakumar. One day, he decided to sell off the scrap.

Today, unbelievably, in its place there is a nine-acre Eco Park. All types of trees grow there: eucalyptus, tamarind, coconut and the jackfruit. Plants and flowers are in abundance. The chirping of birds is unmistakable. And saplings have been planted by visitors, like the Collector M. Beena and the chairman of the Post Trust. N. Ramachandran.

“As soon as a person joins our company, he also plants a sapling,” says Nandakumar. “So there is a lot of emotional connection with the park.” And there is an economic benefit also. “We make Rs 8 crore a year selling scrap,” says Nandakumar, who visits the park regularly.

Nandakumar has also set up a rain harvesting system. There was a low-lying area in the refinery which was unused. “The idea came to me that we can store rainwater,” he says. A large lake has been formed. “We have dug 21 wells, so that the water percolates to the earth and the groundwater is replenished,” he says.

The refinery is a remarkable place. There are rows and rows of pipes running along for hundreds of metres. There are storage tanks, the size of football fields, apart from cooling towers, crude distillation units, and effluent treatment plants.

Because the product is oil, there is the ever-present danger of fire. “To offset it, there is a fire station and three layers of checks and balances,” says Nandakumar. “If one employee makes a mistake, there are others who can correct it.”

Since December, 2005, there has been 17.2 million accident-free hours. A frank Nandakumar says, “There have been narrow escapes, but thanks to luck and God, nothing untoward has happened. It is a big achievement.”

However, Nandakumar’s biggest achievement has been to set up a single-point mooring system. Earlier, small ships used to come right up to the city, near Rajendra Maidan, to unload 70,000 tons of crude oil every month at the Cochin Oil Terminal.

“It was a safety hazard,” says Nandakumar. “Secondly, it took a lot of time. Since large ships could not come close, the crude had to be unloaded onto small ships. The costs went up.”

But now, carriers unload the oil directly at a tank farm at Puthuvypeen. There are four tanks which can hold 70,000 tons each. From there, the oil is taken by pipes through Vypeen, Mulavukkad, Bolghatty, on to Rajendra Maidan.

From there, the pipe snakes its way, 22 feet underground, through Hospital Road, MG Road, to Ernakulam Junction railway station, and goes all the way to the refinery, a distance of 19.2 kms.

The project, which cost Rs 756 crore, was commissioned in December, 2007. “We have an annual operating savings of Rs 80 crore,” says Nandakumar. He is at present busy with the Rs 3500 crore modernisation project to meet Euro 111 and IV standards for auto fuels.

Asked on his tips on leadership, Nandakumar says, “I take decisions quickly. A subordinate is looking for that all the time.” He says it is important to put the right man in the right job, have a sense of transparency, and keep the door open. “Anybody who has a problem can meet me,” says Nandakumar.

Thanks to this, he is popular and successful.