A dazzling journey into outer space 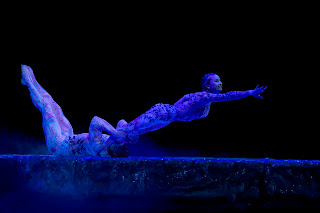 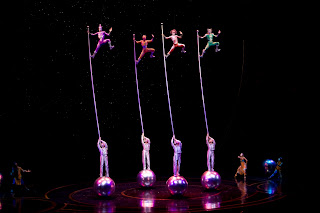 A few minutes before the show, 'Zaia,' is about to start, a clown, held up by wires, can be seen high up near the ceiling of the large theatre at the Venetian Macau hotel. Then he floats down till he lands on the aisle.

He runs down, reaches the stage, picks up a big tub of popcorn, turns around, and begins sprinkling it all over the audience. The people laugh aloud nervously, taken aback by this sudden act of aggression. Then the clown, who has spiky red hair, oversized trousers and shoes, a cherry red nose and wide ears, jumps on to the hand-rest of a seat, steadies himself, and runs all the way, without losing his balance, to the other end.

He shouts, raises his hands triumphantly, like a modern-day Tarzan, and jumps to the ground. The crowd exhales in surprise and shock, and breaks into sustained applause. ‘How did he do it?’ is the thought in most people’s minds.

Moments after this interlude, a huge globe floats down from the back of the theatre, and lands gently on the stage. This is when 'Zaia' begins.

“Zaia is the story of a young girl who dreams of becoming an astronaut and discover the mysteries of space,” says Flora Tong, public relations executive of the Cirque Du Soleil, the parent company (see box). “In her travels, she is able to look at the Earth with a fresh eye and also falls in love.”

The boy is none other than Romeo. He is enamoured by the innocence of Zaia (a Greek word, which means ‘life’). They meet briefly at the beginning and go out of touch. And throughout the 90-miniute show, he goes in search of her, and meets up with her only at the end.

In her journey, Zaia is accompanied by clowns and Adam and Eve. “They represent eternal love,” says Flora. “It is through Adam and Eve that Zaia understands what love is, which she displays to Romeo when she meets him.”

She also meets up with the Aristos, beings from another era, who represent high society, and a sage: “The Sage is regarded as the wise old man who embodies the different eras of humanity,” says Flora.

Then there are acrobats who balance themselves on poles shaped like weathervanes. “What makes this act special is the fact that the poles are held by boys who are standing on globes,” says Flora. There is also an African shaman, who is joined by others, all dancing, frenziedly, in the suddenly-dark hall, with sticks that has flames of fire at both ends.

The dance and the acrobatics shown by these different characters are simply stunning. They perform the tango and the gypsy dance. They jump through rings of fire, and float all over the huge theatre, held up by wires. There is a high-jumping trampoline skit, as well as a trapeze act, reminiscent of our circus shows in India, but done with better skill and finesse.

Says choreographer Martino Muller: “It is emotional energy that connects the dancers to the acrobats. In turn this energy also connects with the audience, linking human emotions in an inspiring way.”

Says director Gilles Maheau: “The stage is the centre of a hurricane, where dangerous forces confront each other.”

Indeed, he is right about it being a hurricane. The 1800-member audience often goes “Oooh” and “Aaah”. And it is a truly international crowd: Japanese, Australians, Americans, Europeans, Indians, and so many Chinese. (Both Hongkong and mainland China are only 40 minutes away by high-speed catamarans).

The most amazing part is how one act seamlessly moves into another, even though the props are completely different.

However, to create this brilliance, it needs a lot of preparation. “The troupe trains for hours every day, but there are also specific timings for different dancers,” says Gilles.

Incidentally, the 75 dancers come from 22 countries, and they include people from Canada, China, America, Australia, Holland, Russia, and Ukraine. “Auditions were done and the best were selected,” says Gilles.

In Macau, the ‘Zaia’ is performed 380 times a year. Usually, there is a single show at 8 p.m. on weekdays, two shows on the weekend, and during public holidays like the Chinese New Year there are three shows a day.

Flora says that the Cirque is very interested to come to India. “When we held the IIFA (International Indian Film Academy Awards) at the Venetian Macau, in 2009, a lot of Indians came to see our show and loved it,” says Flora. “So India, along with China is one of our focus markets.”

Undoubtedly, the Cirque team is expert at marketing their show. As I approach the entrance, with my ticket, before the start of the performance, a young man, wearing a black and red uniform, persuades me to pose in front of a large painting of Zaia and Romeo, at one side.

A photo is taken, and a token is given. At the end of the event, when I present the ticket, I am given a large photo of myself, and two key-chains which contain the same photo of me standing in front of the Zaia painting.

Back in India, each time I see the keychain, I am reminded of one of my most memorable experiences in recent times.
------

The Cirque Du Soleil (Circus of the Sun) is an entertainment company based in Montreal, Canada. It was founded in 1984 by two former street performers, Guy Laliberte and Daniel Gauthier. It traveled around Quebec as a performing troupe.

Their turning point came when they performed the Le Grand Tour du Cirque du Soleil , as part of the 450th anniversary celebrations of the discovery of Canada, and became an instant success. It then developed a repertoire by adopting circus styles from all over the world.

Today, the Cirque, with an annual turnover of $800 million and 4000 employees, performs in many cities in the world. It has a permanent base in Las Vegas, where its shows are viewed by 9000 people every night. Some of the names of the shows are ‘Varekai’,. ‘Zumanity’, ‘Love’, and ‘Zaia’.

Last year, when the late singer Michael Jackson wanted to give a special surprise at the birthday of his daughter Paris, then 11, he hired the Cirque to perform in his Neverland mansion. Now, there are plans for the Cirque to bring out a show based on Jackson’s songs.
SS