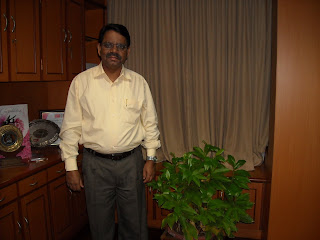 Dr. Philip Augustine, the managing director of Lakeshore Hospital, Kochi, says too many Malayalis suffer from diabetes, heart disease, obesity and alcoholism. According to him, medical tourism is the new growth area

Dr. Philip Augustine, the managing director of Lakeshore Hospital, Kochi, is about to speak to me when he gets a call. A man from Chengannur wants to know whether his friend, an Omani national, could come across to do a liver transplant. “He has to bring along with a donor,” says Augustine. “We cannot provide donors.”

Following the conversation, Augustine says, “Medical tourism is one of the big growth areas for us.” According to a McKinskey report commissioned by the Confederation of Indian Industry, there is a potential business earning of more than $1 billion annually.

“When you compare the costs between India and America we are 90 per cent cheaper,” says Augustine. He gives an example: A lady in Florida did her knee replacement operation in the USA and it cost her $40,000.

“For the second operation on the other knee, she had no insurance money,” says Augustine. By searching the Internet, she located the Lakeshore Hospital. The 10-day package cost her only $4000.

As more foreigners show interest, the Lakeshore Hospital, which has 350 beds, has plans to build a 250 bed hospital, costing Rs 50 crore, in the same campus. “Fifty beds will be set aside for foreign patients,” says Augustine.

Another cause for expansion is that that the hospital, which gets about 700 out-patients daily, is unable to admit around 15 patients because of the lack of beds.

One reason for the large number of patients is because it is a major treatment centre for critical accidents, kidney and liver failure, septicemia and brain haemorrhage. It is also a referral hospital for smaller hospitals and nursing homes.

The hospital’s success, says Augustine, is because they have kept up to date with the latest methods available abroad, including key and pin-hole surgeries. Through key-hole surgery, the appendix, the gall bladder, the kidney and even certain cancers can be removed with the least amount of pain and time.

Augustine says that the best part of his job is the interaction with patients. Sometimes, there are some amazing moments. He remembers the case of a 40-year-old Malaysian, of Indian origin, called Prem, who came to get his liver replaced. The donor was his wife, Hema.

Despite extensive tests, when the liver transplant was about to be done, it was found that there were some problems with a blood vessel in Hema’s liver. So, if her liver was removed, it would endanger her life. The doctors wondered what to do next.

At this moment, a 25-year-old man was brought to the hospital. He was a victim of a car accident and was declared brain-dead. When tests were done, the youth had the same blood group as Prem, so the transplant could be done easily. But the doctors were in a dilemma: how to ask the mother, Teresa, for an organ donation during this tragic moment?

Then a series of coincidences took place. The authorities came to know that Teresa was a follower of a Christian preacher based in Kolencherry. By luck, the preacher had been a patient in Lakeshore a few months earlier.

The man was contacted. He came to the hospital and was able to persuade Teresa to give permission so that her son’s liver could be taken. “And that was how a Malayali boy from Muvattupuzha saved the life of a Malaysian from Kuala Lumpur,” says Augustine. “I felt good about it.”

Augustine also felt good, when a few months ago he was bestowed with the Padma Shri for his contributions to medicine. Asked for his views on the state of Kerala society, he says, “Too many Malayalis suffer from lifestyle diseases like diabetes, cholesterol problems, heart diseases and obesity. This is because of erratic eating habits and excessive drinking.”

He bemoans the culture of alcoholism that is prevailing in the state. “If you drink, you should enjoy it,” says Augustine. “Instead, people gulp down the liquor and get drunk as fast as they can. It is senseless. There are too many alcoholics in the state and it is having a devastating impact on many families.”

Augustine’s advice to people is simple: Eat and drink in moderation and do exercises regularly. “Health is wealth,” he says.

(Some names have been changed)
(The New Indian Express, Kerala)