'If we take God's help, we will never go wrong' 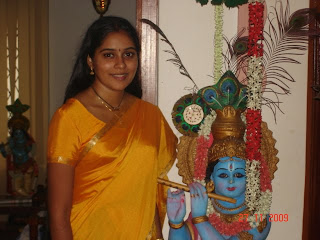 In 1989, when Lakshmi Menon's mother, Meena, was three months pregnant with her, she began suffering from a gynaecological problem. The doctor told Meena she would have to go in for an abortion. “I am the first child of my generation and all the family members started crying,” says Lakshmi. Her uncle, Raghunath, immediately went to the Lord Ganapathi temple at Edapally and offered a lamp: a Kedavilakku.

The peculiarity of this ritual is that if the lamp is placed at 6 p.m., it has to be checked at 6 a.m. the next day. “If the flame remains steady throughout the night, the matter will end in a good way,” says Lakshmi.

The next morning, when Raghunath inquired, the priest confirmed that the flame had remained constant. “There is no need to worry,” said the priest. “Everything will be fine.”

When Meena went to the hospital, a scan was done, and there was nothing wrong. “The day before my mother had so many problems, but suddenly she became all right. It was a miracle,” says Lakshmi. “I came to this world thanks to Lord Ganapathi's blessings.”

So, it is no surprise that Lakshmi's favourite god is Lord Ganapathi. Every morning, when she awakens, she lights a lamp and recites a Sanskrit mantra to the Elephant God.

(May the God of a million radiance give success in life and the fulfillment of all goals and dreams.)

When asked to prove that God exists, Lakshmi, a student of St. Teresa's College, Kochi, says, with a smile, “Isn't my birth the best proof that God exists?”

She says that one of her cousin sisters, Asha, had jaundice, which resulted in a damaged liver. “The doctor said her situation was grave,” says Lakshmi.

One day, Asha's husband, Sajeev, went to a Lord Shiva temple and prayed fervently. “Sajeev told me that he felt Lord Shiva had come down from the inner sanctum and stood next to him,” says Lakshmi. “However, when he opened his eyes, there was nobody there. But Asha recovered and became all right.”

So, does man need God? “God is man's father who can guide him throughout his life,” she says. “If you take guidance from a person it may not be right because he is a human being and prone to mistakes. But if we take God's help, we will never go wrong.”

But like any young person, Lakshmi gets angry with Lord Ganapathi when bad things happen. “I will scold Him and say, 'I will never pray to you.'”

She remembers being very upset when she could not secure admission to the B.Com course in 2007. “I became very sad,” she says. “I felt that my life was ruined. I came home, went to the puja room, and shouted at the Lord. But, looking back, I am glad I did not take the commerce stream, because I like literature a lot. I want to be a writer and a journalist.”