‘Sathya Sai Baba is an avatar of God’ 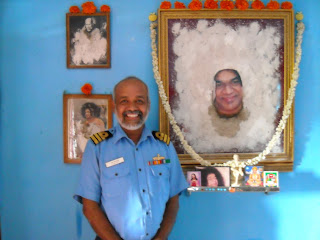 I meet S. Balasai, a Commander of the Indian Navy, at his friend, Rajasekharan’s office on Willingdon Island. There is a large photo of Sathya Sai Baba on one wall, and it is nearly covered by vibhuti (sacred ash). At the centre of the photograph, there are drops of honey. There is a sweet fragrance in the room.

“All photos of Sathya Sai Baba sprout vibhuti and honey,” says Balasai. “He has a supernatural power. My friend, Shivaprasad’s sister, who lives in Dubai, has a photo of Sai Baba in her living room. The same thing happens there and all over the world.”

In fact, later, a colleague from Thiruvananthapuram, a skeptic in the beginning, but a devotee now confirms that the mysterious phenomena can be seen at his home also.

“Sathya Sai Baba is an avatar of God,” says Balasai. “I cannot prove this to you, just as I cannot show that air exists. I just feel it. He has been my favourite God ever since my parents introduced me to his teachings during my childhood. Sai Baba is all-knowing.”

Balasai gives an example. He took a friend, Rajeev, to Bangalore since he wanted to have a darshan of Sai Baba. But Balasai was not sure whether Sai Baba was at his ashram in Whitefield, near Bangalore or at his base at Puttaparthi in Andhra Pradesh. When they reached Bangalore, by bus, it was late at night.

“I prayed to Swamiji and asked him where I should go now,” says Balasai. “Suddenly an auto-rickshaw driver came up and, without me speaking a word, said, ‘Sir, come with me, Swamiji is at Whitefield.’”

Balasai was shocked. “The driver took us to the ashram,” he says. “The next day we had the darshan of Swamiji.” They were able to listen to his famous principles:

On January 26, 2003, Balasai had the most unforgettable experience of his life. He had a personal meeting with Sai Baba at Puttaparthi. Balasai had gone there with three other friends: a Muslim, a Jain and a Christian. Sai Baba selected the quartet from the thousands of people present.

“We were taken into a small room,” he says. “Sai Baba was seated on a chair, while we sat on the floor in front of him. He created diamond rings and gave it to two of my friends.” Sai Baba then asked Balasai a few details of his life, even as he produced vibhuti.

During the conversation, Balasai had a mystical experience. “I was in a state of bliss,” he says. “I became unaware of my surroundings. I lost consciousness of myself as a person. Whenever I recollect the meeting, the hairs stand up on my arms.”

When Balasai closes his eyes to pray, he sees the feet of Sai Baba. “It is like the pink petals of the lotus. When I see this image I am ready to surrender to him.”

But despite his intense devotion, when bad things happen, Balasai gets very angry with Sai Baba. “I tell him, 'Why you are doing this to me?' Sometimes, I say that I will never talk to him again. But after a while I prostrate myself in front of his image.”

Interestingly, when Balasai looks back, a few weeks after the negative incident, he realises that it was for his good. “There is nothing bad in this universe which has been created by the Supreme God,” he says.