A long journey comes to an end 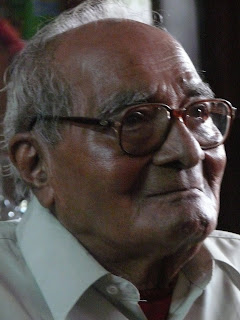 One of Kolkata's oldest Malayalis, Joseph Chiramal, died last week at the age of 101. “He passed away peacefully in his sleep,” says daughter Grace, from Kolkata.

Chiramal was born on January 25, 1909, at Konthuruthy, Kochi. Following his matriculation, where he got the first rank, he went to Kolkata in 1929 to pursue employment opportunities. He was forced to do this because his family was going through financial difficulties.

Chiramal rose to become the Company Secretary and retired in 1964, after 33 years of service. Then, for the next 46 years, longer than his years of employment, Chiramal drew a pension from the company. “Undoubtedly, he was the only employee to draw a pension for such a long time,” says Grace.

In his last years, Chiramal kept good health, except for a lung infection in 2008, for which he was hospitalised. If the weather was good he would go for Mass regularly at the Christ The King church in Park Circus near his home. On Wednesdays and Saturdays Chiramal would go to the barber shop for a shave. “He would always walk to and fro,” says Grace. “Dad also enjoyed going for long car drives and we would take him as often as we could.”

In his last years, Chiramal would spend his time reading newspapers, books and magazines, as well as the large-print books of his grand-daughters. He would also count the weekly cash collection at the church.

“Dad would keep his mind sharp by totalling the dates of the calendar, horizontally, vertically, and diagonally,” says son Joe. Sometimes, he would check his bank passbook and ask questions about some of the figures he could not understand.

Asked why Chiramal had never returned to Kerala, following his retirement, Joe says, “We children lived in Kolkata, so our parents wanted to be near us. My father was involved in a lot of activities: he was a member of the Society of St. Vincent de Paul, as well as the Kerala Catholic Social Service Centre. And they had so many friends, so they stayed on.”

But Chiramal did come to Kerala, accompanied by Grace, in December, 2004, to see his only remaining sister, Cecilia, 90, and Rebeka's brother, T.N. Mathew, 94. “Both of them passed away in mid-2005, so the visit was timely,” says Grace.

Chiramal, as expected, found Konthuruthy, his birth-place, completely changed. However, they met an old lady who recognised Chiramal and took him to his home. But it was no longer there. Instead, there were a lot of new buildings and bungalows. “The paddy fields had vanished,” says Grace. “However, Dad’s memories of the place were accurate!”

Asked about the secret of his father's long life, Joe says, “He led a simple and disciplined life. He took meals at regular times, exercised regularly, and was a calm and relaxed person.”