'Be pure of heart' 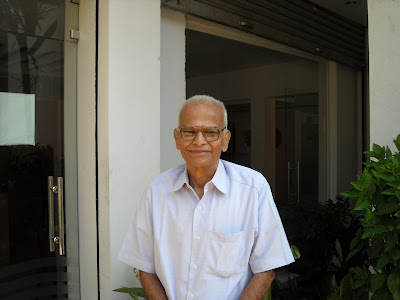 Says businessman S. Balakrishna Bhat and you will be able to get in touch with God

Businessman S. Balakrishna Bhat, 74, recounts an incident that he read in a book, ‘Living with the Himalayan Masters’ by Swami Rama.

The swami was standing with his guru, Sri Madhavananda Bharati, on a railway station. The station master, Sukhdev (name changed), said, “Swami Rama, please give me some words of advice.”

Rama turned to his guru who said, “Be sincere. Don't ever tell a falsehood in your life.” The same day, there was an inquiry by a railway official regarding some allegations of corruption. Sukhdev confessed that the department took bribes, including himself. Everybody was suspended.

But soon, the others got together, denied any wrongdoing, and accused Sukhdev of being the culprit. Consequently, the station master was arrested. When he was presented in front of a magistrate, Sukhdev said, “I don’t need a lawyer. I will be telling the truth. You may punish me, but I am ready to face the consequences.”

During the lunch break, the magistrate called up Sukhdev and said, “I know that you are telling the truth. But what made you do so?” The station master told the story of how he met Swami Rama and his guru. The magistrate had heard of Swami Rama. After a drawn-out hearing, the magistrate set him free. It was exactly one month from the date Sukhdev was arrested. By this time, his wife and son had left him.

The next day Sukhdev received a telegram stating that his ancestral property was being taken over by the government. The compensation amount was Rs 1 lakh, which was a huge sum, 70 years ago, when this incident took place.

When Sukhdev received the cheque, he gave it to his family. They asked him to stay with them. Sukhdev shook his head, and said, “Within 30 days of truth telling, I got this huge reward. So, I don't want to be with you. I want to live with the truth.” And he left.

“Truth liberates you,” says Bhat. “When you tell the truth, you get closer to God. But unfortunately, these days, people are afraid of the truth. There is widespread dishonesty in public life, especially among politicians and businessmen, and in personal relationships.”

One major problem is that in most people, the ego dominates. “They are much too entangled in business and family affairs,” he says. “They do not have the time to get in touch with God.”

Bhat, a Konkani, has lived in Mattancherry island all his life. Every morning, he does a puja in a 160-year-old family temple. After the rituals, he always ends his prayers by saying, ‘Loka Samasta Sukhino Bhavantu – Let all be happy in the world.’

“This is a most powerful phrase and I try to say it many times a day,” he says. “I also ask God to guide and bless me.”

Asked to prove that God exists, he says, “I am sure God is present, but I cannot prove it to you. When I encounter problems in my life, I have called on Him and He has come to my aid. An argument regarding the existence of God is useless. It is all about faith. Either you believe, or you don't.”

Bhat says that all religions are equal. “However, going to a temple, church, or mosque is a preliminary step,” he says. “Thereafter, if you are pure of heart, you can reach Him directly. If we follow God’s guidance we will never make a mistake.”