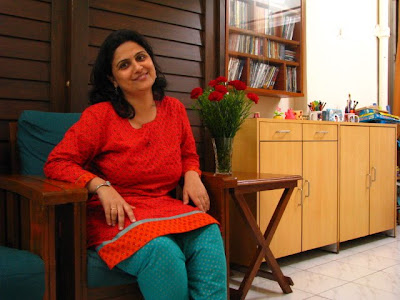 By repeating this mantra, and following Nichiren Daishonin's Buddhism, Vasuda Arora experienced a dramatic change in her life

In 2004, Vasuda Arora was feeling hopeless about all aspects of her life. “I was at a stage when I felt like a failure,” says Vasuda, who is married to a Mumbai-based television producer Suresh Mathew. “I had no idea of what I wanted to do with my life.”

It was also a time when her parents were going through health and financial problems. “There were family conflicts,” she says. “When this happens, you feel like a victim and wonder why bad things happen to loved ones only?”

It was during this difficult period that her sister Nandini spoke to her about the power of Nichiren Daishonin's Buddhism. “She told me that if I kept repeating one mantra, ‘Nam-Myoho-Renge-Kyo’, and followed the philosophy, there will be a big change in my life,” says Vasuda. “My first reaction was one of disbelief. I thought that by chanting one phrase you cannot change your life. It was silly.”

But for six months Vasuda read about the philosophy and asked many questions to Nandini. “One day I decided I would give it a try,” she says. And very soon, she started to notice a change within herself.

“I began to feel a lot of hope and courage which I had never experienced before,” she says. “The best thing about Daishonin's Buddhism is that you are not praying to an external force.”

In other religions, God is outside you. “One keeps praying to this entity and if that God is happy, good things will happen to you,” says Vasuda. “If He is unhappy bad events will take place.”

But in Daishonin's Buddhism, there is no God. “Instead, we try to bring forth the Buddha nature which is inherent in all of us,” she says. “Soon, you become aware of the limitless potential within you.”

'Nam-Myoho-Renge Kyo' is based on the Lotus Sutra which was propounded by Gautama Buddha. “It is the mystic law that governs life eternally throughout the universe,” says Vasuda. The mantra was invoked by a Japanese monk, Nichiren Daishonin, in the 13th century, and has spread all over the world.

Apart from chanting, Vasuda also recites sections of the Lotus Sutra daily. “I ask for happiness for myself and others, and to achieve my life goals,” she says. “I also pray to become a happier and better person.”

It seems to have changed Vasuda. “When I was in college I wanted to be a therapist but felt that I did not have the skills and the self-assurance to become one,” she says. “But after I began practising Daishonin's Buddhism, I became extremely positive and confident.” Vasuda did end up becoming a therapist. “And the best news is that we have achieved harmonious relations within the family,” she says.

Vasuda also took steps to repair a quarrel with a school friend, Meera (name changed), whom she had known for fifteen years. “Because of my ego and stubbornness I told myself, ‘Why should I try to solve it? If Meera does not care, let her go to hell,’” says Vasuda.

But after months of prayer Vasuda overcame her anger and was ready to forgive Meera, who had said many hateful things to her during the break-up. So, she got in touch with Meera, but her friend was reluctant to meet Vasuda. “But eventually we met, spoke our hearts out, and became friends once again,” says Vasuda. “We realised that we had wasted five years of our lives by not talking to each other.”