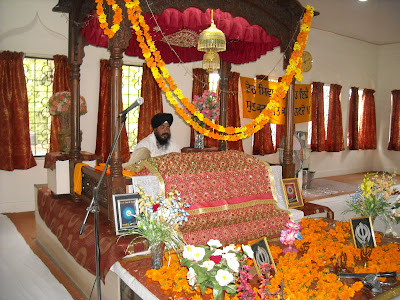 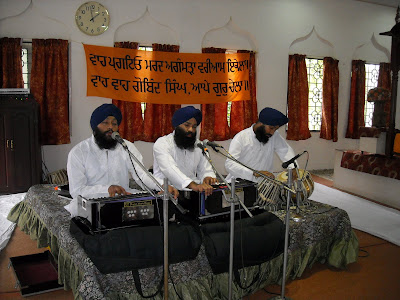 The Sikh community in Kochi celebrated Guru Gobind Singh’s 344th birthday at their gurudwara with kirtans, prayers and a delicious lunch

Photos: The structure where the Guru Granth Sahib is placed

The kirtan singers from Pune

When I enter the Gurudwara Shri Gobind Singh Sabha in Kochi I am given a glass of chilled rose milk. Then I place my shoes on a counter which is manned by Kulwant Singh Allagh, a respectable-looking Sardarji and receive a token in return. Somebody ties a cloth around my head. Then I wash my hands and feet and place my forehead on a flagpole, which has the holy Nishan Sahib flag. This pole is put up at all gurudwaras, so that its location can be seen easily.

Up a flight of steps and I enter a large hall. At the centre there is a throne called the Takht on which the Sikh's holy book, the Guru Granth Sahib is placed.

Everybody sits cross-legged on the floor, to signify the equality of people. On this particular Sunday in January, the Sikhs are belatedly celebrating the birthday of Guru Gobind Singh (born December 22, 1666). Says Manjit Singh Sethi, a businessman: “We are celebrating it on a Sunday, so that everybody can be present.”

Singers from Pune have been invited. It is a trio of brothers: Surinder, 32, Sukhwinder, 31, and Ajit Pal Singh, 29.

They sit next to each other on a small stage, with two harmoniums and a tabla in front of them. They are dressed identically in blue turbans and white shirts and pyjamas. The music begins and lead vocalist, Surinder, starts singing.

Soon, the men and women in the audience sway their bodies from side to side and nod in appreciation. The kirtan lasts for several minutes.

Thereafter, Surinder begins a commentary. “Guru Gobind Singh is a guru for everybody,” he says. “Sikhism is not only for Sikhs. Hindus, Muslims, and people from other religions are welcome. Do remember that in the Guru Granth Sahib, there are writings by [mystic poet] Kabir also.”

As he talks, a man steps forward and places an envelope on the stage. Says Manjit Singh: “The singers don't take any fees for their performance, but if you give a donation, they will accept it.”

Soon, the singers move on to the next kirtan. One and a half hours goes past in the blink of an eye, so mesmerising is the singing and the music. Thereafter, the head-priest, Kulwant Singh, a tall man, with a flowing white beard, stands behind a mike and conducts prayers. Clearly he is abreast of current events, because he says, “Let us pray for the victims of the Sabarimala tragedy.” 102 people had died in a stampede on January 15, the concluding day of the Sabarimala season.

Thereafter, volunteers distribute Kara Parshad, a type of halva, to all the members. This is regarded as food blessed by the guru. The session concludes and I get a chance to talk to the vocalist, Surinder.

“My parents were kirtan singers,” he says. “I started learning from the age of seven.” To ensure that he is suitably qualified, Surinder secured a master’s in vocal singing from the Punjab Sangeet Natak Akademi. The group performs all over India and abroad.

“The aim of the kirtans is to create a link between the audience (sangat) and God,” says Surinder, who knows 3000 kirtans by heart.

The singer has a close link to Kochi. Surinder is married to Umeet Kaur, the daughter of businessman Kulbir Singh, who has been living in Kochi for the past 20 years. Incidentally, the Sikhs are a 120-member community in Kochi. Nearly all of them are doing business in automobiles, furniture and garments. But for the kirtan singing, the Sikhs who work at the Naval Base on Willingdon Island and in transferable jobs are also present.

Meanwhile, I move on to the langar hall where lunch is being served. Bunty Singh takes me to the kitchen where all the community members are placing food on steel plates. “We have no cooks,” he says. “The food is made by all of us.” At another side, other members are washing the dishes.

In the hall, once again, people sit on the floor to eat. “Everybody is equal,” says Bunty Singh. The food is simple, but delicious: dal makhani, chapatti, rice, vegetables, a salad of cucumber and onions and a rice-based payasam.

Not many Kochites know that there is a thriving gurudwara right in their midst, on Varghese Thattil Road. “We welcome everybody,” says a smiling Bunty Singh.