'Lord Krishna is a multi-faceted God' 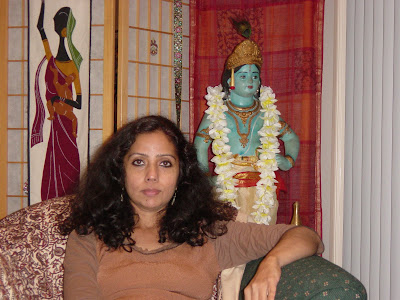 In 2001, dancer Padma Menon was living in the Netherlands with her Dutch husband. “It was a new country,” she says. “I did not know the language. I was struggling with the idea of being a woman, a dancer, and a mother of two small children.” Eventually, Padma found it overwhelming and decided to give up dancing. So, she enrolled for a course in gender studies at the Institute of Social Sciences in The Hague.

Sometime later, at a party Padma met Danica Anderson, a psychotherapist from America. “I told Danica I was a dancer,” says Padma. “We spoke for a couple of minutes. Then I moved away.”

Five minutes later, Danica came up to Padma and suddenly said, with emphasis, “You should not give up your dancing.” For Padma it was a turning point in her life. “I immediately realised that this was a message from God,” she says. “These kinds of things happen to me all the time. It was a moment of serendipity.”

The Australia-based dancer, who was in her home town of Thrissur recently, had another moment of magic. “I was wondering whether people from diverse backgrounds such as a Muslim, Hindu or a Christian can all have the same ideas about human rights and justice,” she says. “But I could not find any book on this subject.”

Then, one day, by chance, Padma was in a small bookstore in Thrissur. They had only one book by the Nobel Laureate Amartya Sen, called 'The Idea of Justice'. “I opened it and every question that I had in my mind, he was discussing it in the book,” she says. “It was God who guided me towards that book.”

Padma believes in the Vedantic concept of spirituality. “We are all part of the divine,” she says. “If we don't accept our divinity, then God will always remain outside of you and apart.”

For Padma, her favourite deity is Lord Krishna. “He is a multi-faceted God,” she says. “Krishna is a politician, philosopher, friend, son, and lover. I find him fascinating. He does not talk about spirituality as an other-worldly reality. Instead, he talks about it in the way that we experience it at every moment of our lives. It is about being a warrior when you need to be one, and knowing how to make the right decisions in the battle of existence.”

Padma says that when she prays she tries to find the Krishna within herself. “I know He exists inside me, even though he is a male God,” she says. “I don't think spirituality has anything to do with gender. These are just energies and capacities which all of us have.”

Meanwhile, whenever Padma is in Thrissur, she goes to the Devi temple near her house to pray. “It is like visiting my neighbour,” she says. “It is a small temple and not crowded.”

Her image of the Devi, when she closes her eyes, is that of a woman wearing a red saree and a gold necklace and having a loving and compassionate look. “I keep this image in my mind when I am in Australia,” says Padma, who does not visit any temple in her adopted land.

But she has one practice that she does unfailingly with her children. Every evening Padma lights a lamp in her house. “For children, the structure of a religion is very important,” she says. “We cannot always remain on the abstract level. That is why rituals play such an important role in people's lives. It connects us to God, and enables you to have a divine feeling.”