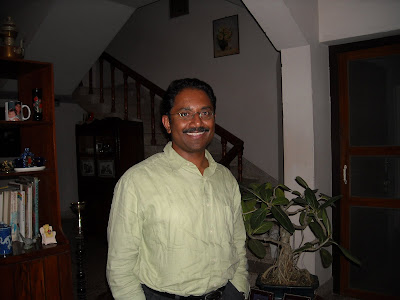 Ben Verghese was part of a research team at Stanford University which created a revolution in computers with the concept of virtualisation. He talks about his experiences and reflects on how the IT industry has changed in India

When Ben Verghese was working in the Hewlett Packard company in California, a group of Indians would go out for lunch. Once when they were returning to the campus, they realised, with a sense of surprise, that the guard at the gate was an Indian. One of Ben's friends said, “This is interesting. Not all Indians have a master’s in computer science.”

Yes, indeed, the brain drain towards the United States in the 1980s was like a flood. An IIT graduate from Chennai in 1985, Ben did his doctorate from Stanford University. He was part of a research group that came up with the concept of virtualization, which has created a worldwide revolution in computers.

“The virtualization software divides the physical machine into multiple virtual machines,” says Ben. “It enables you to run an operating system and applications in each of these divisions.”

The company that he works for, Vmware, of which his former mates at Stanford were the founders, pioneered this development. Today, Vmware has more than 8000 employees and enjoys worldwide sales of $2 billion. Ben is the vice-president, chief management architect, at Vmware.

On a recent visit to Kochi, where his mother lives, Ben says that he has no regrets about not working in India. “In the hi-tech industry, there is no better place in the world than Silicon Valley,” he says. “The concentration of talent and energy are unbelievable. It is a meritocracy. I fulfilled my potential because I work there. Would I have done so in India?” Ben ponders over the question for a while, and says, “I don't know.”

But he admits that there is a sea-change in the Indian IT industry in the past 25 years. “Almost every major IT company in the US has set up shop in India,” he says. “Some companies have invested significantly, while others have developed a back office.”

But Ben is disappointed that despite so much of software talent, there have not been many start-ups that have been outstanding. “Nevertheless, most big companies have realised that in order to have a successful branch here, you have to give responsibility to the employees,” he says. “Some of it is happening now, but not that much as yet.”

But Ben is confident that India is going to dominate the world economy in the coming decades. ““India has the advantage of a huge young population,” he says. “America will no longer be the sole superpower on the international stage.”

So, is America in decline? “I am not sure,” he says. “But at various levels, they are seeing the limitations to their strength. Apart from India, China, Brazil and Russia are also growing economic powers. America is still the largest market, and everybody wants to get in, but there are budget deficits which are being funded by selling bonds.”

Not surprisingly, many of these bonds are held by China. As a result, America is less able to act like a leader. “They realize that the world has changed because of globalisation," says Ben. "They know that there is a limit to military power, because of the setbacks in Iraq and Afghanistan. In these days, wars are non-conventional and so it is that much more difficult to win.”

As for Ben, living in America has not been a win-win situation. “The biggest minus for me is that we have no family there,” he says. “I miss the ties with relatives. But if I want to attend a marriage or any other event in Kerala, it will take me twenty hours by flight. It is not easy to come.”

But he is happy that thanks to technological innovations like Skype and E-mail, he feels less cut off. “Now I can talk and see my mother every day,” he says. Because of his two small sons, Ben now makes it a point to come at least once a year to Kochi, so that they can get in touch with their roots. “They also love coming to India,” he says.

But like most NRI’s, Ben is disappointed by the chaotic traffic in Kochi. “Every trip is a struggle,” he says. “So much time is wasted in traffic jams. In the long run, it will affect productivity.”

Ben feels that it is imperative that both Kerala and India invest heavily in infrastructure so that the economy can continue to grow at a fast pace. But he suddenly breaks into a smile, and says, “Despite all the problems, it is always good to be back home.”