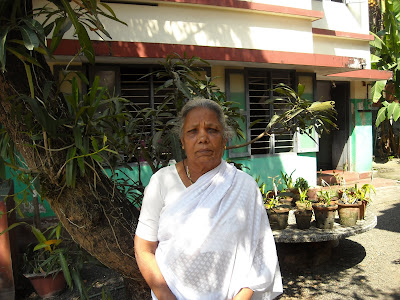 As social pressures and the pace of life increases, more and more parents in Kerala are at the receiving end of violence and abandonment by their children

Photo: Kochu Thresia at the Home for the Aged at Kochi

A decade ago, when Kochu Thresia became paralysed on one side of her body, she was taken to the General Hospital in Kochi. “I called my son and asked him whether he could take care of me,” she says. Her son, Thomas, a painter of houses, said he would have to consult with his wife. Two days later he called and said, “My wife has to look after our two children. I have to go for work, so it would be difficult to look after you.”

Thankfully, after a few months, Thresia regained movement of her limbs. Thereafter, she started working as a maid in different houses. But as she grew older, she began losing her strength. She told one of her employers, a doctor couple, whether they could help. They agreed and brought her to the Home of the Aged run by the Sisters of Charity. “I have been living here for the past nine years now,” says Thresia, 74.

When she recounts her life, tears flow down her face. “My children, a son and two daughters, have never come to see me,” she says. “In my youth, we loved and respected our parents and cared for them in their old age. When my father was seated on a chair, I sat on the floor as a mark of respect.”

Thresia says that children these days are only interested in getting the money and property of their parents. “Like garbage, they throw us out on the streets,” she says. “With great difficulty we carry the child in our womb for nine months, and give birth. I breast-fed my children till they were two years old. We go through so much of anxiety when they fell ill. So, why don’t they look after us?”

Sitting next to her is A.R. Xavier, 72, whose wife died a few years ago. His son, James, had faked ownership papers over his father's property, which comprised one-third of an acre. When Xavier came to know about it he filed a suit in the High Court. A month ago, the judge ruled in his favour.

“Soon, I will be going back to my home,” says Xavier. “It is nice to stay in this old age home, the people are fine and the facilities are good. But I have a desire to breathe my last in my own house. I am going to ask my son and daughter-in-law to vacate. It is a house that I made with the sweat of my work. My son changed after he got married. He forgot his parents and thought only about his wife and children.”

Now it is Xavier’s turn to cry. His body shakes with the sobs.

Sr. Theresa Joseph Cherukunnel, the coordinator of programmes at the home, listens to Xavier with a stoic look on her face. She says, “Children no longer want to look after their parents. They are married and have families of their own. They find their parents a burden. Sometimes, children beat up their parents if the property is not transferred in their names.”

But is there a possibility that the parents have ill-treated the children? “I don't think so,” says Sr. Annrose Varkey, mother superior. “Children simply forget the love and affection shown by their parents. Sometimes, the daughter-in-law has a problem with the mother-in-law. Then she instigates the son to send the parents to an old age home.”

There are 103 boarders at the home, out of which 22 are men. They range in age from 45 to 93. The nuns run a laundry, and the inmates help out with the washing, and the ironing. “The inmates grow vegetables and help in the cooking and the cleaning of the utensils,” says Sr. Theresa. “They sweep the floors and feed those who are critically ill.”

Many of them suffer from diabetes, hypertension, high cholesterol, heart problems, asthma, Parkinson's Disease, osteoporosis and arthritis. “Their sadness at being abandoned has aggravated their illnesses,” says Sr. Theresa.

On another day, I go across to meet Biju Mathew, the Kerala state head of HelpAge India, an NGO which looks after elderly people. He says that men and women react differently when faced with abuse by their children.

“Women will take the abuse silently,” he says. “They will always look at their children with love in their hearts and will never complain to outsiders about their ill-treatment. On the other hand, it is the men who will call our helpline and ask for assistance.”

Recently, a 92-year old former Army Major, Rajan Nair called HelpAge and complained that his son does not allow him to go out or receive telephone calls from relatives. “When we talked to the son, he had a defensive attitude,” says Biju. “They don't want an outsider to interfere. They are not ready to accept that they are doing something wrong. But our counsellor will tell them about ways to treat their parents in a better manner.”

So what are the reasons behind the abuse? “The rise of the nuclear family is a major cause,” says Biju. “Earlier, in the joint family, there were enough members to look after the needs of elderly parents. Now, in most families there is only one son and daughter.”

Sometimes, both husband and wife are working. And the fast pace of life of present-day society is having an impact. “People don't have the time to talk to parents,” says Biju. “Neither do the grandchildren. Parents are not taken out for outings because children find it a cumbersome process. The elders feel neglected and suffer from loneliness.”

Soon they slip into depression. “This is followed by a deterioration of health,” says Biju

On many occasions, children get angry with their parents because of their reluctance to hand over the property to them. “They shower abuses on them,” says Biju.

A London-based professional called HelpAge and said that his brother, who lives in Kochi, was abusing the parents, because he wanted to sell the house and property since he needed the money. But the parents were not giving permission. “He had resorted to slapping and beating up the old people,” says Biju.

According to a recent HelpAge survey across eight cities – Delhi, Mumbai, Ahmedabad, Kolkata, Bhopal, Chennai, Patna and Hyderabad – 36 per cent of the elders reported abuse of varying kinds.

So, how does one prevent abuse from taking place? “Parents should plan their lives in such a way, that through fixed deposits or other means, they are able to ensure a monthly cash flow,” says Biju. “Thus, they are not dependent on the children.”

Parents should never give their property to their children till they die. In case they have done so, there is a new law by which it can be taken back (see box below). Both parents and children should learn to adjust to each other. Elders should strive to be busy, by doing work linked to their expertise, or do community service. That way, they will remain mentally and physically alert.

Interestingly, there is a sea-change in attitude among the children when the parent dies. “They feel an enormous sense of guilt,” says John E. Daniel, Senior Manager (Programmes) at HelpAge. “They had taken their parents for granted. On many occasions, children have confessed to us that they had not treated their parents properly. It is only after the death that the children recall, with deep affection, the love of their parents. Sometimes, to over-compensate for their guilt, they will donate money in the name of their parents.”

Unfortunately, no amount of donations can wipe out a lifelong regret.


Maintenance and Welfare of Parents and Senior Citizens Act, 2007

Maintenance includes provision for food, clothing, residence, medical attendance and treatment. The maximum amount which may be ordered for maintenance of a senior citizen shall not exceed Rs 10,000 a month.

If children do not have sufficient means the state government may establish, in a phased manner, sufficient senior citizen homes and maintain the same for abandoned and neglected senior citizens

Under Section 23, if after the commencement of the act, any parents or senior citizens have transferred their property to the children or relatives on the condition that they would provide certain maintenance and amenities to the senior citizen, but subsequently neglect or refuse to do, the parents or senior citizens can get such transfers voided (cancelled) at their option by having such transfers treated as a fraudulent or coercive acquisition and seek return of their property so transferred.

When Jacob Varghese, a former deputy manager with the State Bank of India, got an opportunity to go to the United States of America, like his elder brothers, he said no. “I was the youngest of eight brothers and sisters,” says Jacob, who lives in Puthupally, near Kottayam. “I wanted to stay back to look after my parents.”

When his father died in 1981, he had no hesitation to look after his mother Mariamma, who is now 103. “My parents gave us so much of love, affection and care,” says Jacob.

Till 2003, his mother was in good health. Then she had a fall and broke her leg. “She has been bed-ridden ever since,” he says. But since Jacob's wife is working as a teacher, they hired a home nurse. “Otherwise, my mother's health is fine,” he says. When asked whether he had contemplated placing his mother in an old age home, he says, “Never.”

Jacob says that the problem with the present-day generation, who are willing to place their parents in old people's homes, is the high element of selfishness. “They don't care for others,” he says. “They are just obsessed with making money. It is a very disturbing trend.”

(This is a national number, where calls will reach the respective state offices. These are manned by counsellors proficient in English as well as the regional language).