A homecoming of sorts 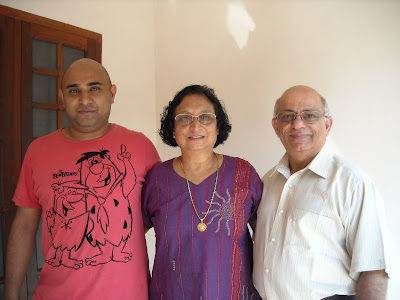 Samson Pallivathikal, of Jewish ancestry, who lives in Israel, has built a house in North Paravur so that he and his family can come and stay for extended periods of time

There is a power-cut in the Samson Pallivathikal household at North Paravur. Ron, a scientist, 34, says, “I cannot understand. Kerala is a place where it rains so heavily. So why should there be an electricity shortage?”

But the answer becomes evident soon. Outside, three Kerala State Electricity Board men, in khaki uniforms, are pulling cables towards an electric pole. “Sir, the bulbs and fans will start working within five minutes,” says one worker. And Ron and his parents, Samson and Miriam Artzi give a wide smile. “We had been receiving electricity from an adjoining house,” says Samson.

He had a couple of reasons to build the bungalow. Since Samson, an Israeli citizen, has a Person of Indian Origin Card, he can buy and hold property. Secondly, he had been unhappy with the hotel facilities available in North Paravur. On January 20, the Samsons, of Jewish ancestry, held a house-warming ceremony. Friends and relatives dropped by for the function. But their 1800 sq. ft. bungalow in North Paravur took a year to get ready.

“I was astonished to see the workers take a nap in the afternoons,” says Artzi. “We cannot imagine such a thing happening in Israel. A job which can be finished in one day, they take three days here. In Israel the house would have been completed in two months.”

Says Ron: “If there are three workers, one will do the work, another will be watching, while the third will do nothing.”

Nevertheless, Ron's father, Samson, has a happy look on his face. He left Kerala for Israel in September, 1973. He had gone because he could not find a Jewish girl to marry in Kochi and he also believed deeply in Zionism – a political movement that believed in a sovereign Jewish homeland.

Two weeks after he arrived, Samson found himself in the middle of the Yom Kippur war between the Arabs and the Israelis. “I was in a state of shock,” he says. Anyway, the war ended in three weeks, Samson recovered, learned to speak Hebrew, did a six-month course in accountancy, and began working for a Scandinavian company at Ashdod Port. Two years later, he had an arranged marriage with Artzi, who was also from North Paravur. It was in 1978 that Samson joined El Al, the national airlines of Israel.

Today, Samson continues to work there. “The retirement age in Israel is 67,” says Samson, 64. “After that, I plan to spend many months in North Paravur where I have a lot of friends.”

In Israel, Samson lives in Rehovot, which is 20 kms from Tel Aviv. In the early years, there was a certain form of discrimination against the Cochin Jews. “But now all that is over,” says Samson. “There are a lot of marriages between people of different countries.” His own daughter, Noufar, 28, is married to a Jew of Hungarian-origin, and has four children.

So what is it about Israel that they like? “We enjoy a European standard of living,” says Samson. “The streets are clean, the houses are well-maintained, and the traffic is smooth.” But the cost of living is high. “A good meal for four costs Rs 8000 (1 shekel = Rs 13).”

And Israelis, even though they are far more efficient than Indians, are a tense, nervous people. “It is probably because we are surrounded by enemies on all sides,” says Ron. “That is why when we come to India we feel calm, because the people are friendly and kind, and in no hurry at all.”

Incidentally, throughout their years in Israel, Samson and Artzi yearned for Kerala a lot. “We missed the rain, the greenery, the people, and the culture,” says Artzi. On Republic and Independence Days, they would go to celebrate it at the Indian Embassy. Nevertheless, when asked whether they are Keralites first and Israelis second, the family says, in unison, “We are Israelis first, Jews second, and Keralites third.”

And then Samson clarifies. “Right from our childhood, we would always end our prayers by saying, 'See you in Jerusalem,'” he says. “We knew that the moment we had our own country, we would have to go there.” Says Ron: “The origin of the Jews is at Judea (modern-day Israel). Nevertheless I feel a part of me belongs here.”