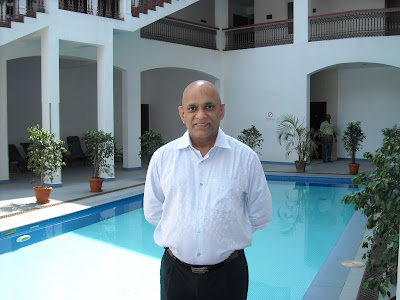 One day, in 1995, while reading a newspaper in Cologne, Germany, Joseph Killian read a one-line advertisement in English. It said: 'Seeking investors'. This was followed by a telephone number. Intrigued, the Kochi-born Joseph called and found himself connected to the office of Cardinal Vincentas Sladkeviciu of Lithuania.

The next day Joseph flew to the capital, Vilnius, to see first-hand the possibilities of doing business. The church had land in the centre of town, and the Cardinal wanted to lease out a few establishments like pubs. “This was impossible for a person like me, who did not know the language and had no local experience,” says Joseph. “It is like a foreigner coming to Kochi to start a bar.”

Joseph was preparing to return when he had an accidental meeting with an architect called Linas Pajeda. He told Joseph that the price of land in Lithuania was very cheap. The government was planning to demolish many dilapidated buildings and would provide subsidies for investors to build flats and loans to buyers at a paltry interest of 3 per cent. “This will create a boom,” said Linas.

Convinced by the proposal, Joseph and Linas set up a company called Modernus Namas (Modern Homes) and over the next few years they built an astonishing 333 flats and sold them all. “We made a fortune,” says Joseph, with a broad smile.

It was also in Lithuania that Joseph began a new habit. In the evenings, when he used to go to the pubs, the people would stare at him. At that time he had long hair and a thick beard. Joseph was puzzled. Later, Linas told him that the locals thought he was a member of the Taliban. An apprehensive Joseph immediately shaved off his beard and hair. “When I left, I carried on shaving my head every morning,” he says. “That is why I continue to remain bald today.”

In 2005, Joseph came for a vacation to his most favourite place on earth: Fort Kochi. There he met a real estate broker, Hamsa Koya, who pestered the German-Indian to buy land. “Hamsa said the price of land will go up,” says Joseph. When Joseph saw a plot of land, with an area of 45 cents, opposite the Vypeen jetty, he decided to buy it. He intended to sell it later when the price went up.

“But the moment I bought it, all my friends and local contacts told me I should set up a hotel,” he says. “It is in the prime tourist locality in Fort Kochi.” And that was how Joseph set up the Killians hotel on an investment of a few crores of rupees. It is a three-star hotel and has 22 rooms, a restaurant, a swimming pool and a bar. Killians became operative on July 8, 2009. Nearly all the customers are from Europe, USA, and the Far East.

But for Joseph, doing business in Kochi has been a difficult experience. “If people know you are from outside, they are bound to cheat you,” says Joseph. “The business people think that it is only through swindling that they can make money. I lost Rs 1 crore because of fraud by different contractors and agencies, while constructing the hotel.” He was also compelled to satisfy the influential people in the area.

Joseph came up with an interesting theory on why bribe-taking is so rampant in Kerala. “Many people have been appointed by the ruling party in various posts,” he says. “They are told that they would have to shell out a certain amount of money every month to the party from the bribes they get. So even if you want to be honest, it is impossible.”

This is a far cry from his life in Germany. “People are honest there,” he says. “When you go to a government office to renew an identity card or a passport it takes less than five minutes. No official will ask you to come another day, as they regularly do so in Kerala. It is regarded as an offence. An official can be sacked if he says this to a citizen.”

Initially, Joseph, 61, wanted one of his three daughters -- Kim, 32, Gim, 29, and Pamela, 20 -- to settle down in Fort Kochi and help him and his wife, Grace, run the hotel. Now he tells them to remain in Cologne. “If somebody wants to make money India is the place to be,” he says. “But if he or she wants to sleep peacefully at night, then they will have to do business somewhere else. It is as simple as that.”