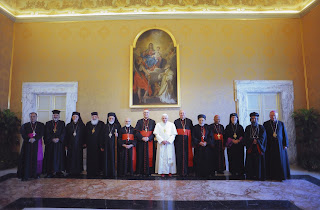 For the first time in the history of the Catholic church a meeting took place of all the Patriarchs of the Eastern Church at Castelgandolfo, the summer residence of Pope Benedict XIV recently. (The Eastern churches comprise mostly those from India, Russia, Ukraine and the Middle East).

“The Pope wanted to listen to the problems in the Middle East,” says Cardinal Varkey Vithayathil. There has been a lot of migration of Catholics in that area to Australia and New Zealand. As a result, the number of Catholics is going down.

According to Church sources, most of the Catholics fled, unable to bear the religious oppression they faced in Islamic countries. Some have even lost their lives. On February 29, 2008, Archbishop Paulos Faraj Rahho and three companions belonging to the Chaldean church were abducted and killed in Mosul, Iraq.

Vithayathil said the Syro Malabar church has a special connection with the Chaldean church. “We received their bishops from the 4th to the 15th century,” he says. “It is their liturgy that we are still using. So we empathise deeply with their sufferings.”

Among the leaders present were representatives from Lebanon, Iraq, Egypt, Syria, Israel, Ukraine and Romania. Apart from Vithayathil, the other Indian representative was Cleemis Thottunkal, Major Archbishop of Thiruvananthapuram of the Syro-Malankars.

The Patriarchs from the Middle East spoke frankly about the problems they faced. A deeply affected Pope announced the holding of a two-week long Eastern Synod for the first time ever on October, 2010.

“This will be a historic event,” says Vithayathil. “The Pope wants to have an in-depth discussion about the situation in the Middle East.”

Incidentally, the Eastern Churches comprise only 2 per cent of the world population of Catholics. The Ukrainian church has the largest number of followers, at 60 lakh, followed by the 40 lakh strong Syro Malabar church in Kerala.

Meanwhile, in a separate ceremony, Cardinal Vithayathil presented the stamps and coins issued in the name of Saint Alphonsa to Pope Benedict.

“The Pope was delighted that the Indian government, a secular one, had released these stamps and coins,” says Vithayathil. “He said that very few governments around the world honour their saints like this. This shows the deep respect given to different religions in our country. We are deeply proud of this.”