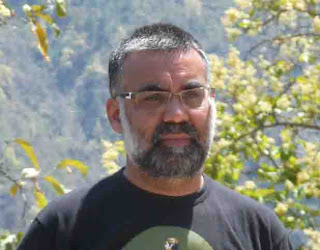 Says Prof. Sanjay Srivastava, as he presented a paper on ‘The History of Pornography in India’

When Sanjay Srivastava, a professor of sociology at Delhi University was about to begin his lecture on the ‘History of Pornography in India’, he said, “I just want to warn you that some photographs may be offensive. They are semi-pornographic in nature.” Of course, when he said this, it had the opposite effect: nobody left the hall. Prof. Srivastava spoke passionately and at length on this interesting subject.

Here are excerpts from an interview:

Is there a culture of pornographic writings in India?
From the beginning of the 19th century, print-pornography was circulated widely in many parts of India. In Kolkata there were specific localities that were famous for publishing pornographic materials. This was popular among the middle and upper middle classes.
However, when the colonial government enacted obscenity laws, pornography began to be published under the guise of medical advice for various sexual problems.

What was the situation in Kerala?
In Kerala there is a history of filmed pornography. Even though films were more expensive to purchase, there were a large number of people who could afford to buy it. Films were easier to transport, without being detected, and thanks to the large Malayali diaspora in West Asia and other places, it became a lucrative market.

How is pornography represented in books and magazines?
Most of the English-language glossy publications tend to be 'soft-porn'. They carry extremely explicit articles on sex, different forms of sexual pleasure, women's sexuality, single women and sex, and homosexuality, besides articles on etiquette and other issues.
Then there is ‘footpath-pornography'. These booklets show photographs of European women in raptures.

Does footpath pornography sell well?
Yes, they have the widest circulation. They are cheap to purchase, and are sold at places frequented by poor people: railways stations, bus stands, slums, and resettlement colonies.

Apart from the poor, who else reads pornography in India?
Men of ALL age groups in ALL classes buy it, especially in the 18-40 category. But women have also become avid readers. This is part of a new culture of sexual freedom. So what is available to men is also regarded as a woman's right. Also, an increasing number of couples are able to access different kinds of pornography, thanks to the Internet and movies on hire.

In which language are pornographic sales the highest?
Hindi, Bengali, Malayalam and Tamil books and magazines have some of the highest circulations.

What are the themes?
The danger of the modern woman: she cannot be trusted to be a good wife because she has very strong sexual desires. But one can have fun with her, unlike a traditional woman. Having forbidden sexual relationships: with a sister-in-law or an aunt. There are tales of sexual encounters with strangers in trains or planes. Finally, there is the avenging woman who sets out to trap a man who might have raped her and punish him in some way.

Which is the period in history when pornography in India was at its peak?
Right now!