The Switzerland of the East 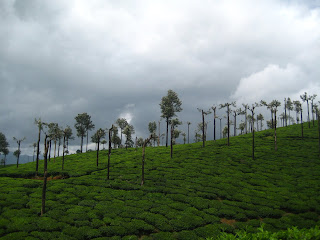 At 5 p.m., a group of engineering students set out in a Scorpio from Kochi towards the hill station of Valparai in Tamil Nadu, 160 kms away. A few hours later, they see a herd of elephants on a deserted road. On either side there is dense jungle: thick trees with overhanging branches. The shrill cry of crickets can be heard.

They stop, and following a tip from their Valparai-based friend and guide, Bennett, who is in the vehicle, they keep the engine idling and the headlights switched on.

A few moments pass in silence, as the elephants gaze unblinkingly at them. There is a pin-drop silence in the car. “As soon as there is a gap between the elephants, just press the accelerator,” says Bennett, in a whisper to T. Raghil who is driving the Scorpio.

Raghil nods. A couple of minutes later, he spots an opening and steps on the accelerator. They are safely through. Whoops of joy are let loose by the students as they continue on their way to Valparai. It was a tense moment. One error of judgment and the elephants could have trampled on the vehicle.

When the group reached Valparai, at 11 p.m., it was raining and had become cold. The students were tired and sleepy. The next morning, when they set out to see the Sholayar Dam, the students were in for a surprise.

As soon as they crossed the town limits, they saw porcupines and bison on the road, unmindful of their presence. George Vadakkel, a bird lover, sighted the lion-tailed macaque, the hornbill, as well as the rare Malabar Whistling thrush.

“The Sholayar dam was big,” says Nitin Prabhakaran. From there, Bennett took them to see a 14 km- long tunnel, with a height of 50 feet. A stream flows from one end to the other. Built when the British ruled the country, it cuts through a mountain, to channelise the water to the other side. When the boys stepped inside they were hit by flying bats. But after a while they got used to it. Later, a couple of them drank the pure, cool waters and felt refreshed.

The highlight of the trip was a visit to the Grass Hills, which is part of the Indira Gandhi wildlife sanctuary and national park. Fondly referred by the British as the ‘Switzerland of the East’, the Grass Hills is a biologically fragile area. “There are pockets of forests which have existed from the Jurassic period,” says Bennett.

At an altitude of 1800m there is a bungalow, which had been built for King Edward VII, who wanted to go hunting in the hills. Since it was deep in the jungle, the group, before setting out, had to buy lamps, salt, rice, chicken and vegetables.

It was while going there that the students encountered a hazard, which is inescapable in the hills: leeches. All of them received several bites. Unlike a mosquito bite, you don’t feel anything. The leeches just suck your blood and fall off when they are full.

To counter them you need to apply Dettol all over the body or put salt on it. You are not supposed to pluck them because the jaws can remain in the skin and that can turn infectious.

It was eerie and silent by the time they arrived at the bungalow in the evening. The forest rangers cooked an excellent chicken curry and rice. But when the temperature dropped to 14 degrees centigrade the boys started shivering. It was only when the rangers provided the group with sleeping bags that they were able to sleep.

At night when Bennett got up he was hesitant to use the toilet, which was in the backyard. So he took an empty bottle and did the needful. When he stepped out to get rid of it, two rangers saw him and said, “Hey man, share the liquor with us also.” Bennett gave a sheepish smile and stepped back into the room.

The next morning they set out to explore the hills. “It was so beautiful that it was indescribable,” says George.

There were grassy hillocks for miles together. It was similar to the African savannah. They spotted elephants, langurs, the Indian Gaur and the bison.

One of the rangers, Rajan, said a bison had gored one of his colleagues on the back. The injured man needed 40 stitches. Apparently, a bison is hot-tempered and more dangerous than a tiger.

“A tiger usually attacks when it is under threat or hungry,” says Roshan Joby. “A bison is very unpredictable. One moment it is grazing and the next moment it is charging at you.”

As they watched the bison the weather changed suddenly and it became very misty. Soon, there was zero visibility and the winds began blowing at 60 km per hour. The group was left with no option but to go back.

On other days, they went to see Top Slip, a national park in the Anamalai Hills, the forests of Chinnakalar, the Balaji Temple and the Aliyar Park

“The charm of Valparai is that it is unspoilt,” says George. “Outside the town you cannot see a single piece of plastic or paper. There are very few hotels or resorts. I am sure Munnar must have looked like this, fifty years ago, before tourism destroyed its beauty.”