From the hills of Tripura 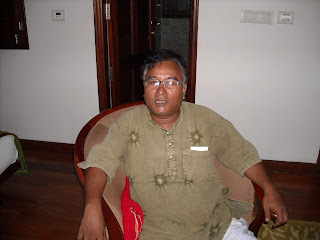 Poet Chandrakanta Murasingh talks about writing in a much neglected language, Kokborok, which belongs to the indigenous tribes of the north-eastern state

Sitting on a lounge chair beside the swimming pool of the Taj Green Cove at Kovalam, Tripura poet Chandrakanta Murasingh launches into a poem in Kokborok, the language of the indigenous tribes of the state.

Here are a few lines, translated into English:

‘The haunting madhavi fragrance
Escapes the rustle of spring air
It is acrid with the smell of gunpowder.’

The word, ‘gunpowder’ is slightly jarring. So why has Chandrakanta used it? “There has been so much of violence in Tripura between the extremists and the Army,” he says. “The extremists want independence because of decades of neglect.”

What is peculiar about Tripura is the domination of the Bengalis in all aspects of life. “The indigenous tribes have no say,” he says. In fact, the Bengali influence is so pervasive that the Kokborok language uses the Bengali script.

Chandrakanta blames the former kings of Tripura who allowed the language to fall into disrepute, even as they adopted Bengali as the official language.

“The great Bengali writer Rabindrananth Tagore who had visited Tripura seven times never once spoke about the neglect of Kokborok,” says Chandrakanta.

Because of this, for years, the indigenous tribes suffered from an inferiority complex and never spoke the language in public. However, there was some redemption when the state government made Kokborok an official language, on par with Bengali, in 1979.

Chandrakanta’s poems deal with the social, political, cultural and psychological problems of the people. “I also write about the wonder of nature,” he says.

There is a reason for this. Chandrakanta grew up in a village called Twiwandal, which had mountains on all sides. Near the village there were jungles and streams. “It was beautiful,” he says.

When he was a youngster he would help his parents, both of whom were farmers, in tilling the land and taking the cows out to graze.

The urge to write poems arose when he was in high school. “I would get emotional and a poem would come out of me,” he says. He continued writing over the years and has published six books of poetry, even as he goes about his job as an officer of the Tripura Gramin Bank.

The highlight of his writing career occurred when he won the Bhasha Samman Award given by the Sahitya Akademi in 1996 for his contribution to Kokborok literature.

“It was a big moment for me, as well as for the language,” he says with a smile.