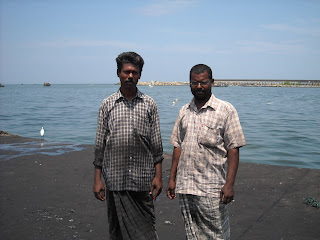 As lakhs of Malayalis return from the Middle East because of no jobs, the spectre of financial collapse haunts many

At Shaktikulangara fishing harbour, near Kollam, the smell of fish is so overpowering that the urge to retch is intense for visitors. But for workers John Lazar, 48, and Yesudasan James, 39, they look unfazed as they haul plastic crates of fish onto the back of trucks. Both are wearing dirty shirts and lungis.

Among their friends they are known as the ‘Gulf returnees’, having returned early this year from Dubai. The sky is a translucent blue, the sun is shining brightly, seagulls fly about lazily, and a nice breeze is blowing, but their eyes are downcast and their shoulders are stooped.

And there is a reason for this: John is neck deep in debt. In October, 2008, he was summarily sacked as the foreman in a company as the effects of the global recession began to be felt in Dubai. He hung on for three months looking desperately for another job but ran out of luck and money. He returned in January.

He had been earning Rs 35,000. Because of this, he took a loan of Rs 3 lakh from the local bank and bought a small house and property. The monthly repayment is Rs 7000 per month, which he has been unable to pay for the past few months.

Since he had used up his savings, he has taken further loans to meet the expenses of his family, which consists of his wife, a 17-year old son and a 15-year old daughter. “In effect I am Rs 7 lakh in debt,” he says. This job in the harbour gives him a daily income of Rs 250, but it is irregular.

At home he feels pained when his son asks for money to go for a college excursion or for a film and he is unable to give it. “But he does not complain at all,” says John. “He understands the problems I am going through.” But his daughter is different. She throws a tantrum when her needs are not met.

“To be frank, we have reached a stage where all four of us could commit suicide,” he says. “That is how bad the situation is.”

Yesudasan looks as depressed as his colleague. He was working in a marine company in Dubai for a monthly salary of Rs 23,000 when he also lost his job. Like John, he had taken a loan of Rs 7 lakh from the bank and put up a house. “The repayment is Rs 10,000 a month,” he says.

In the initial months, after his return, he had pawned off his wife’s jewellery and other valuables to make the payments. But now, for the past six months he has not paid anything. Yesudasan has to clear another sum of Rs 1.4 lakh which he took to pay the agent who took him to Dubai.

Yesudasan has a work visa which expires in September, 2010. So he went in July to try his luck again but did not get anything. “The situation is grim in Dubai,” he says. Incidentally, according to Morgan Stanley, a global financial services firm, the stalled real estate projects in the Middle East adds up to a stupendous $263 billion.

Meanwhile, like John, Yesudasan gets a daily wage of Rs 250. “I try not to think about the problems I am facing,” says this father of three small children. “I live from moment to moment. If you think too hard, you might want to commit suicide.”

A few streets from the harbour, in a cream coloured house, called ‘Joyland’ lives labour agent Joy Thomas. In the courtyard, there is a Mercedes Benz E-270, a Toyota Innova, and a Scorpio. Joy also doubles up as a film producer having brought out the 2007 Malayalam hit, ‘Hello’, which starred superstar Mohanlal.

A broad-shouldered man, in his late thirties, Joy has sent around 800 workers from Shaktikulangara in the past few years to the United Arab Emirates and other countries.

“Most of these labourers want an easy life,” he says. “Their biggest drawback is that they do not want to look for other jobs. They are only comfortable working for a marine company or a dredger.”

But he says jobs are available as electrical fitters and plumbers in Abu Dhabi and Qatar, but they are not willing to learn a new skill. “They have only themselves to blame,” he says.

Around a thousand people have returned to Shaktikulangara in the past several months. “The job in the harbour finishes by 10 a.m. and till the next day at 5 a.m., they just idle around, smoking and drinking,” says Joy.

One reason for their indolence, says retired businessman Naithil Vincent is their lack of skills in other jobs. “They also don’t know how to run a business,” he says.

What has caused frustration is that the fishing business is not doing well, because there are fewer export orders. “Many of the boat owners are from outside the area and bring their own workers,” he says. So the gulf returnees don’t get much of a chance and suffer in silence.

This suffering is taking place in other districts of Kerala, like Kannur, Wayanad, Malappuram and Palakkad.

In Manayankod, in Palakkad district, T. Harichandran has returned after 28 years in Dubai. He was working in the electricity department when the government slashed his salary to one-third. “It was not possible for me to survive,” he says.

It is the end of the Gulf dream for him, as he is 50 years old and will not get a visa again because of his age. “I have a little bit of savings,” says this father of two college-going children. “I plan to start a business.”

Junaid, 43, was working in Dubai for 23 years. Last year, he joined the ‘Sun and Sky’ jewellery shop as the manager. When the recession hit, he lost his job. He returned to Chettuva, near Chavakad in central Kerala four months ago.

“I am struggling to find something to do,” says Junaid, who has two teenage sons. “It is also not easy to adjust to life here.”

In Malappuram, 90 per cent of the families have one member who has returned from the Middle East. One of them is P.K. Nissam, 25, who has come back from Dubai. He was working as a labourer loading and unloading containers near the port. “I was sacked suddenly,” he says. He tried hard to get another job, but to no avail.

Nissam had gone to Dubai in order to clear the debts incurred by the family following the marriage of his younger sister, Zubeila. “It came to Rs 1.5 lakh,” he says. However, Nissam had to pay the agent Rs 1.1 lakh to get the work visa. And now, his debts have not been cleared. “I am looking for work,” he says. “But jobs are so difficult to find in Kerala.”

However, P.K. Jayachandran, joint secretary of the Pravasi Malayali Welfare Association, says that jobs are available in the construction industry. But young people will not do hard labour work, because society looks down on it. “Nevertheless, they have no problem doing similar work in the Gulf,” he says with a laugh.

In this situation everybody looks towards the state government for help. Says John of Shaktikulangara: “We read in the newspapers that certain schemes have been planned for us, but so far no government official has come to see us.”

Sheela Jacob, the secretary of the state government’s Non-Resident Keralites’ Affairs Department says that they have unveiled two programmes.

One is the Entrepreneur Development Scheme. This is to enable people to start a small business, with assistance from the Kerala Financial Corporation (KFC) at a reduced rate of interest. The state government had given a loan of Rs 100 crore to the KFC to implement this scheme. “However, the response has not been encouraging,” she says.

The second scheme is to provide assistance to people who have returned within two years of going to the Middle East. A sum of Rs 10 crore has been earmarked for this. “We are making efforts to help the people,” she says.

However, the government’s efforts have not had much of an impact. Says Jayachandran: “These schemes are only on paper and are rarely implemented.”

The effect of joblessness is being felt throughout the length and breadth of Kerala, which, for long, had been known as the ‘money order economy’, thanks to postal remittances.

So many families had been able to raise their standard of living, over several decades, thanks to high wages in the Middle East. Now, as that labour market dries up, lakhs of Malayalis watch in fear as they edge closer and closer to the abyss of poverty.

‘Reverse migration has begun’
Says Dr. S. Irudaya Rajan of the Research Unit on International Migration at the Centre for Development Studies, Thiruvananthapuram

In which districts has the impact been the most severe?
North Kerala has been more affected than the south.

What is the financial impact of migration for workers?
Migrants generate the money to pay for the ticket, visa and other expenses from their own savings, or the savings of the parents, or by selling or mortgaging property or borrowing money from money lenders. One of the migrants whom I met in a worker’s camp in the Middle East said, “We borrow money to migrate to the Gulf and there we borrow money to send back as remittances.”

What is the psychological cost of losing a job?
Every migrant goes with a dream. It could be to own a piece of land or a house or to pay for the dowry for a daughter or sister, provide for the higher education of children, or pay for the medical treatment of elderly parents. When this does not happen, the family is psychologically devastated.

However, there are positive aspects also. I met an elderly couple recently in Thiruvananthapuram and the man said, “My son lost his job and came back. The crisis has united our family. He had never visited us for the last four years.”

What should the state government do?
If the government can provide a livelihood option for a permanent stay in Kerala, it will be helpful for the workers.

Is there a possibility of reverse migration taking place in the near future?
My preliminary assessment indicates that the worst of the economic crisis is over and almost all countries are on the recovery path, thanks to several stimulus packages by their governments. There is the beginning of a trend of reverse migration. However, instead of the United Arab Emirates, it will be Saudi Arabia which may emerge as the number one destination for workers from Kerala.

Life in the Middle East for Malayali workers