A star on the ascendant 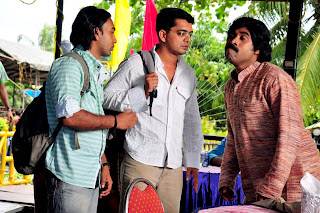 Comedian Suraj Venjaramoodu struts around on the sets of ‘Happy Husbands’. Heroes Indrajith and Jayasuriya provide bonhomie and banter

During mid-morning on a Sunday, Suraj Venjaramoodu is standing at the outdoor restaurant of the Cochin Gymkhana. He is wearing a black wig, a reddish kurta and black trousers. It is the shooting of ‘Happy Husbands’, in which the heroes are Jayaram, Indrajith and Jayasuriya.

“It is similar to the Hindi film, ‘No Entry,’” says Indrajith, who has come to see his fellow actors performing. His own shoot is scheduled for a few days later.

In Scene No 17, Shot 11, Suraj plays a reporter who gets the facts wrong and is beaten up often. Two youngsters, played by actors Karthik Prasad and Pramod Kumar, are angered by one of his inaccurate reports and have come to confront him.

As they come near, Suraj sticks his face out and Karthik, on cue, gives him a slap.

Immediately Suraj rushes to the monitor to see the rushes. His makeup man hovers nearby, gently touching his hair, to make sure everything is in place. But the comedian is oblivious as he intently watches the scene. A few unit hands laugh when Suraj gets slapped.

When you watch it in real life, the slap does not look funny at all, but on screen it has a magically comic effect. “Good,” says Suraj and gets up. A waiter proffers a glass of lime juice, which he drinks in one gulp.

Suraj staggers out to the narrow bridge, which connects the restaurant to the lawn. A group of youngsters ask for a photograph to be taken with him. Suraj nods and expands his already expanded chest. One gets the suspicion that the bulge in his chest comes from a bulge in his ego. Suraj is a star on the ascendant and it’s making him heady.

Soon, he is called for the next shot, a scene with Jayasuriya, who plays a photographer. Jayasuriya looks at a report, which Suraj has written and lets out a snort, as he points out errors.

After the shot is canned, Indrajith, Sooraj, Jayasuriya and director Saji sit around for some banter. Jayasuriya impersonates a woman’s voice so perfectly that the others laugh aloud, especially Saji.

The director is in a happy mood and why should he not be? His debut film, ‘Ivar Vivahitharayal’, with Jayasuriya in the lead, has completed a hundred days. However, that is no guarantee that ‘Happy Husbands’ will be a hit. Such is the fickle nature of movie success.

On the lawn the unit accountant is peeling out several fifty-rupee notes from a bundle, to pay a young man whose cabs had been used. As the youngster is about to take the money, a crow drops its morning ablutions on his right arm. “Chee, Chee,” he says, and rushes towards a tap to clean himself. A slight smile is playing on the accountant’s face.

Meanwhile, a group of waiters sit around on plastic chairs under a tree. One of them says, “The only truly talented people in the industry are Mohanlal, Mammooty, Dileep and Nedumudi Venu. Among the women, who is there to match Manju Warrier?”

“Okay, maybe, but I still feel Manju has the better range,” says the first waiter.

Meanwhile, as Suraj acts in yet another scene, Indrajith watches intently on the monitor. When somebody asks him about his family, Indrajith says, “A beautiful daughter was born to me in June. We have named her Nakshatra.”

Suraj’s take is over and the cameras and lights are moved to another side of the restaurant, for a different scene.

When you watch a shoot, you experience a mix of excitement and ennui. It is fun when the shoot is going on, but extremely boring when nothing is happening. But it is clearly an addictive profession. No wonder few actors ever retire. And star comedian Suraj Venjaramoodu is set to go a long way, bloated ego or not.