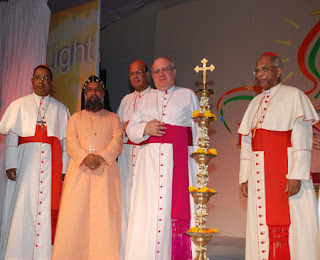 Prabhu Yesu Mahotsav (Lord Jesus’ Festival): that was the name of the first- ever Indian Mission Congress which took place in Mumbai (October 14-18). More than 1500 delegates representing the 180 dioceses all over India were in attendance. Also present were 116 Bishops, representing the three rites of the Catholic church: The Latin, the Syro-Malabar, and the Syro-Malankara rite.

Apart from the Major Archbishop of the Syro Malankara church, Mar Baselious Cleemis, the nation’s three Cardinals were present: Oswald Gracias from Mumbai, Telesphore P. Toppo of Ranchi and Varkey Vithayathil, the major-archbishop of the Syro-Malabar Church.

Cardinal Vithayathil, who delivered the presidential address, says, “The theme is ‘Let Your Light Shine’, which means we want to propagate the teachings of Jesus Christ to the people of India.”

He says that it is important for Jesus that nobody is forced to accept his message, and get converted. It is also important that all that is true and good and lovable in all the different religions of India should be respected.

“We want people to listen to the message of Jesus Christ and his doctrine of love, humility and service,” says Cardinal Vithayathil. “Acceptance of this message is each person’s freedom.”

Earlier, the meet was inaugurated by Archbishop Pedro Lopez Quintana,
the Vatican Ambassador to India and the representative of Pope Benedict XVI.

In fact, it was the earlier Pope, John Paul 11, who, at the seventh mission congress at Guatemala in 2003 suggested that each year a mission congress should be held in one of the five continents. Thus, the Asian Mission Congress was held at Chiang Mai, Thailand, in 2006.

At that Congress it was decided that the Mission Congress should be held in different countries of Asia. “That is how it has come to India,” says Cardinal Vithayathil.

Apart from key-note speeches by eminent representatives of the church, there were discussions, exhibitions, cultural programmes and ‘sharing the faith’ workshops.

In these workshops people described how their faith in Jesus brought them peace and happiness, despite problems and trials. “It has been an enriching experience for me,” says Cardinal Vithayathil.

The aim now is to hold this event once every five years in Asia.