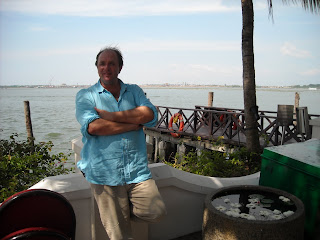 Acclaimed author William Dalrymple surprises me with his powers of recall. Last week when I meet him at the Taj Malabar in Kochi, he says, “Haven’t we met before? At the Kovalam Literary Festival?”

Indeed, he is right. Last year, at the festival, held at the Taj Green Cove, I spotted Dalrymple, standing all alone, at the back of the hall, sipping a glass of water. I walked up to him and asked whether we could have a talk. He agreed and said he would meet me outside in a few minutes.

While I was waiting near the restaurant, Mike Bryan, the CEO of Penguin Books India came up to me and said, “I am ready to talk now.” An earlier scheduled interview had fallen through. So, rather than wait for Dalrymple, I began the interview with Mike.

After 15 minutes, Dalrymple came out and saw me talking with Mike. He raised his hand, as if to indicate, “Continue, continue.” And, because it was the last day, I never got another chance to speak with him.

At the Taj Malabar, Dalrymple is sitting at a table in the garden facing the backwaters. “Kerala is my most beautiful place in the world,” he says. “I love Kochi the most. Just look at it.”

He turns and points at the water and the floating hyacinths. “Look at those marvellous buildings of Mattancherry, there is so much of history there.”

Dalrymple says he is so enamoured about Kerala food that on the night flight from Delhi to Kochi he avoided eating anything. “I wanted to be sufficiently hungry when I landed,” he says. The moment he reached his room he ordered prawn and fish thali, and sambhar. “I just loved it,” he says. And as he talks to me, he is munching on pappadams.

Dalrymple came to Kochi for a reading of his latest book, ‘Nine Lives -- In Search Of The Sacred in Modern India’. Within a month of its release it has become a bestseller. So I ask him about his next book. “I have three subjects on my short-list – the Moghul emperor Aurangzeb, Lord Clive of the East India Company, and Kerala.”

Dalrymple admires the way the different religions co-exist with each other in Kerala. “The syncretism is remarkable,” he says. “I have also toyed with the idea of writing about St. Thomas. But to write I need a house in the backwaters. Who will give me this?”

And suddenly he bursts out laughing. Dalrymple is in a good mood. And he has every right to be. All his seven books – on history, spirituality, travel, and journalism – have sold well, and have won major international awards.

So I ask him for some tips about writing. “Revise, revise, revise,” he says. “I have not come across any brilliant writer who does not revise.” He himself rewrites every chapter between 40 to 50 times.

“Just hearing that makes me feel tired,” I say, as I shake his hand, and wish him goodbye.