Man of the masses 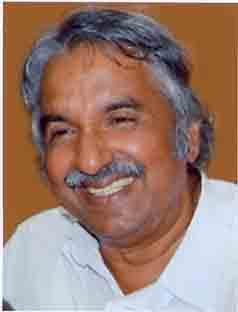 In the 1957 Lok Sabha elections, Prime Minister Jawaharlal Nehru came to Puthupally to campaign for Congress candidate P.T. Thomas. There was high excitement in the town. At that time there was only one two storey-building in Puthupally. Passes to stand on the terrace were issued to a few people, including the 14-year-old Oommen Chandy and his father.

“In those days, the Prime Minister travelled by car, instead of a helicopter as it is today,” says Chandy. “Panditji spoke a few words in English. He was handsome and fair and had a rose in his lapel.”

After the speech was over Nehru stood in the car and flung a garland towards a group of children who were standing by the side of the road. The children pulled at the garland from opposite ends, and it split into two.

“Pandit Nehru put a finger on his lips expressing disappointment,” says Chandy. “I have never forgotten this memory.” Incidentally, Thomas won the election.

Chandy was interested in politics from a young age. It could have been a hereditary trait. His grandfather, V.J. Oommen, was a Member of the Travancore Legislative Council. In school, Chandy was the unit president of the Kerala Students Union (KSU). At 18, Chandy became the President of All Kerala Balajana Sakhyam.

The highlight of his tenure was when Anita Bose, the daughter of Subhash Chandra Bose came to the Balajana Sakhyam office at Kottayam in 1961.

“I gave her a honorary membership which she accepted,” says Chandy. “It became the big event in the newspapers the next day.”

By the time Chandy was doing his pre-degree at CMS College, Kottayam, he was in the forefront in the agitation by the KSU for ticket concessions for students travelling on buses. The principal P.C. Joseph was unhappy with Chandy’s union activities. When Chandy applied for admission for the degree course in history, Joseph refused to give admission.

“There were only four applicants in all,” says Chandy. “I was desperate to get in, because Kottayam was my political base.” But Joseph refused to budge.

At this time, his parents suggested that he join the Kothamangalam Engineering College, since he was good in mathematics. The principal, O.A. Mathew, who was his uncle agreed to admit him.

“I felt demoralised,” he says. “If I had gone for the engineering course my life would have taken a totally different direction.”

Instead, with his local guardian, the MLA, Pala K. Mathew, Chandy sought admission at St. Berchman’s College in Chanaganacherry.

But he was told the principal, Fr Francis Kalassery, was also against Chandy’s selection, because of his political activities. But Chandy had a stroke of luck. The day he went to seek admission, Fr. Kalassery was unwell and in hospital.

The Vice Principal, Fr. Kuriakose Aenekatt was told that Pala K. Mathew had recommended the admission of a young man. “My name was not mentioned at all,” he says. “Soon, I was taken in.”

A quiet student in college, Chandy continued to be involved in various political agitations outside. Following his graduation he joined the Government Law College in Ernakulam in 1967 and came into contact with Youth Congress leaders Vayalar Ravi and A.K. Antony.

Chandy’s biggest turning point came when he was selected as the Congress (Indira Gandhi) candidate for the Puthupally seat for the 1970 Assembly elections. It was going to be an uphill battle because Puthupally was in the control of P.C. Cherian of the old Congress, which was opposed to Indira..

But Chandy campaigned extensively. “With the help of the students and public support I slowly began to make headway,” he says. Soon, there was a mass movement to unseat the Marxists. The sitting MLA, E.M. George of the CPM was unpopular.

Sensing the change in public support, Cherian withdrew from the campaign, although his name remained on the ticket. “This was the turning point for me,” says Chandy. “My chances of winning improved.”

Then another incident took place, which brightened his prospects even further. At a meeting at Vakathanam panchayat, Chandy saw a group of men coming towards the venue with Congress flags. At the forefront was a leader of the old Congress, Kalapara Thommachen.

“I thought they had come to disrupt the meeting,” he says. “But when they came close, to my astonishment they were shouting ‘Zindabad, Zindabad’ in support of me.” Later, he came to know that Thommachen’s son, a KSU activist, forced his father to switch sides.

Eventually, Chandy won by a margin of 7288 votes. And he has held the seat continuously for the past 39 years. Along the way he became the Minister for Labour, Home and Finance, in various ministries, reached the pinnacle of his career when he became the Chief Minister, from September 2004 to May 2006 and is now the leader of the opposition in the current Assembly.

In person Chandy comes across as simple and humane. Asked to explain his philosophy of life, he says, “I am a believer in God. If we do good God will be with us. If we do wrong, He will punish us. It is as simple as that.”