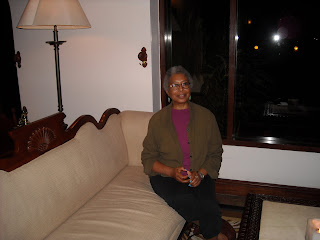 One of America’s great writers, Alice Walker, was in Kerala for a brief visit. The Pulitzer Prize winner, who wrote the best-selling novel, ‘The Colour Purple’, touched down at Kochi, had an Ayurvedic massage, spent time with Booker Prize winner Arundhati Roy, met a few local dignitaries and was off to spend a day in a houseboat at Alleppey.

“There was such a feeling of serenity in the backwaters,” says Alice. “The people may be poorer, than in the cities, but they seem to have more tranquility, self-respect and patience.”

On her road trips with her partner, Garrett Larson, a long-haired South Korean, Alice was amazed to observe a building construction boom. “I am concerned about it,” she says. “Development can be so fast and unplanned, that it could damage the landscape, the animals, and the forests permanently. There is a clear difference between the cities of Kerala where so much construction is going on, and the backwaters where things have remained the same for thousands of years.”

At the invitation of Arundhati, Alice spent a day at the Pallikoodam school, at Kottayam, which is run by Arundhati’s mother, Mary Roy.

“It is, probably, the most beautiful school I have ever seen,” says Alice. “It is artistically inspiring and beautifully maintained. Everything is imbued with colour, spirit and thought. Mary Roy has done an amazing job. The children are happy, smart, and glad to be in school.”

June Jose, the Vice Principal, says the students put up a play to show the evils of dowry. “In ‘The Colour Purple’, the heroine, Celie, gets raped by a person whom she regarded as her father,” says June. “We wanted to show the plight of the girl child in the Indian context.”

As expected, Alice enjoyed the play. “The question of dowry must be brought alive in the minds of younger people so that they know what the situation is,” she says.

Alice spoke to the students about how she stumbled across the horrific practice of female genital mutilation on a visit to Africa. “She said that she had spent several years publicising and fighting this social torture,” says June.

Meanwhile, at Kochi, when Alice was asked about the striking difference between the people of Kerala and America, she says, “Keralites are more friendly, open, and humane. Americans are materialistic, closed, and afraid. They have a fear of strangers.”

Alice was also much taken up by the easy smiles of the populace. “The people understand that a smile is a gift easily given, and why not? [Buddhist monk] Thich Nhat Hanh said, ‘A smile is yoga for the face’. In America, people feel that a smile may get you in trouble.”

Alice had come to Kerala on the Distinguished Visitor’s Programme of the Indian Council for Cultural Relations. “Alice’s first stop is Kerala, on her 15-day visit to India,” says M.R. Krishnamoorthy, Regional Officer of the ICCR. “Thereafter, she will be going to Delhi, Dharamshala and Bangalore.”