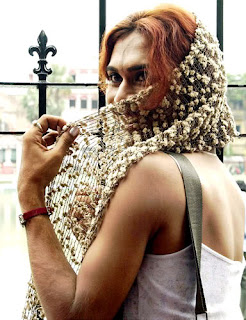 In Kerala, there are a significant number of gays who have married in order to conceal their sexual orientation in a conservative society

When Rasheed Khan, 36, makes love to his wife, Hameeda, he has to imagine that it is his gay lover, Sunil, otherwise he is unable to get a hard-on. “Can you blame me?” he says. “I am a gay who got married because I live in a conservative society. This is the only way to conceal my sexual orientation.”

He is candid enough to say that he does not enjoy sex with Hameeda. “We do it rarely,” he says. Nevertheless he has five children, the eldest being 10 years old, while the youngest is only one.

Rasheed was 11 when he discovered that he liked boys. He seduced a close friend and had sex. Thereafter he had many lovers. But he was always discreet. When he was 25 years old, his parents pressured him to marry. His gay friends told him to go ahead. “They said it might change my orientation,” he says. “So I decided to get married.”

The marriage took place in 1999 and Hameeda came from a village, while Rasheed lived in Calicut. She had studied only till Class seven and had little exposure to the world.

A couple of years after his marriage, Rasheed met Sunil and fell deeply in love. “He is so loving and caring,” says Rasheed. “He is always buying me presents.” They live in different areas, outside Calicut, and try to meet a few times a week.

“For me, the sex is not the primary element in the relationship,” he says. “Love is.”

However, twice or thrice a month, they hire a room in a lodge to have sex. Rasheed sometimes takes on other lovers, but they are just brief flings. He is able to meet a lot of gays, because he works in a NGO that distributes condoms to sexual minorities.

He says he is unsure about whether Hameeda suspects that he is gay. “She has not told me anything,” he says. “Maybe she has guessed it. Who knows?”

During the course of the past ten years, Rasheed has developed a liking for his wife. “Of course, I don’t have the same intensity of feeling that I have for Sunil,” he says. And this creates a feeling of guilt. “I know I am doing wrong,” he says. “I love another person, while I live with my wife. But I am compelled to do this. If we were living in an open society I would have flaunted my sexuality.”

Despite his gayness and the intensity of his feelings for Sunil, Rasheed says that he will never leave Hameeda, because he is a father. “I find it difficult to abandon the tiny tots,” he says. “I have a responsibility as a parent.”

The Thrissur-based Thommen, 34, has also become a parent of two boys. He says he got married to Susan in 2000 ‘because it is dangerous to say you are gay in Kerala society.”

Thommen says that Susan has a suspicion regarding his sexual orientation “but she has not told me anything directly.” Unlike most gays, Thommen has no problem in making love to Susan. “I like sex with men and women, but I do enjoy sex with men more,” he says. “The emotional satisfaction is deeper.” He works in a firm where he does embroidery work. “I have lovers among my female colleagues also,” he says.

Thommen is recovering from a six-year affair with a 42-year old man, George. “He suffered from an inferiority complex,” he says. While Thommen was an extrovert and gregarious, and had many friends, George was a loner. Where Thommen was fair and good-looking, George was dark and morose.

“He was always jealous,” says Thommen.

Thommen’s friends urged him to get a better-looking lover. “But what to do?” he says. “I was in love with him but, one day, he suddenly broke off the relationship. It devastated me. I think of him all the time. ”

Nevertheless, on most evenings, Thommen picks up a lot of gay lovers and has fun in broken-down buildings and deserted gardens. When he reaches home, by 9 p.m., he tells Susan he was delayed at work.

Unlike most people, Thommen does not suffer from any sense of guilt about being unfaithful to Susan. “I don’t regard having sex with somebody else as a betrayal,” he says. “I am fulfilling my duty of looking after my wife and children. But I am also gay, and so there is a necessity to lead this double life.”

But it has not been easy. Thommen has been suffering from misgivings about being married. “I had yearned for freedom a lot in the past, but now that I have become a parent, leaving Susan is out of the question,” he says.

(Names have been changed)

What are the problems that gays face in a marriage?
The man wants to distance himself from the wife in terms of romance, intimacy and sex. The wife finds it difficult to live with that. She will attempt to get closer to him by various means. This will terrify him, and he usually reacts with anger and distress, which the woman does not understand.

What is the sexual relationship between a gay and his wife?
Usually, they are unable to have intercourse. His penis will deflate partially or totally when he attempts to have sex. However, for some men, if they imagine that they are making love to their gay lover, it is possible to get a hard-on.

Most gays have lovers. Do the wives suspect anything?
Most wives think he has got another woman as a lover. She will rarely suspect that he is gay.

Why do gays get married?
They are terrified to live as gays in a society like Kerala, where homosexuality is despised by everybody.

What advice do you give married gays?
I tell them they have a hetero-aversion, which is not changeable with medication, injections, or operations. They have to live with it. To enjoy their lives they will have to indulge in sex with a homosexual partner.

If they do this, how can they stay married?
The man can be taught to behave well with the wife. He can learn to give gifts to her from time to time, pay attention to her concerns and care for the children. If he thinks it is better to come clean we have a joint meeting.

What is the reaction of the wives?
Some wives are shocked. Most are relieved, because they have this closure of their marital problems. Many women continue to live with their husbands, even though they know they are homosexual. But they are glad he is not going to another woman, and so they feel safe.

Do gay men have a sense of guilt that they are leading a double life?
Most gays do not. They say that they got married because it is what society has demanded of them. They put the blame on society. Their conscience is clear. At least that is what they fool themselves into believing.