A man of many parts 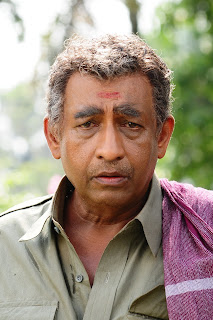 When Nedumudi Venu was in class six, at the Nair Service Society School, he got a role in P.K. Veeraraghavan Nair’s play Industree (Industry). He acted opposite Gopi, an experienced artiste, who had a habit of improvising.

“Gopi had a knife, as a prop, and would pretend to cut his nails or scratch his back with it,” says Venu. “The audience clapped when he did this.”

Venu realised that if he wanted to avoid being overshadowed, he had to do something similar. His costume included a large moustache and a huge mop of hair. Suddenly, he pretended to pluck a lice from his hair and killed it. “The audience laughed,” he says.

Gopi retaliated by using his knife to take out a bit of imaginary food stuck in his teeth. Immediately, Venu took out another lice, this time, from his thick moustache. “I received a lot of claps,” he says. “That was how I learnt to improvise.”

Venu continued to act in many plays during his school years. Once he played the role of a woman in a drama competition and won the ‘best actress’ award.

In 1969, at the S.D. College in Alleppey, there was a ‘serious’ and ‘humourous’ acting competition. “The winner was [future director] Fazil in the serious role while I bagged the prize for the humourous role,” says Venu. “That was how we became friends.”

Venu stayed with Fazil at his home in Alleppey and collaborated on plays and mimicry skits. During another college competition, Fazil got the best director award, while Venu became the best actor. This time, one of the judges was the well-known theatre personality Kavalam Narayana Pannikar. Following the prize distribution ceremony, Kavalam invited Fazil and Venu to join his troupe.

They accepted. One of Venu’s first roles was that of an astrologer, Kalan Kanian. “He had an instrument called the Udukku and would sing songs,” he says. “There were several choreographic movements.”

Some of Kerala’s well-known cultural figures -- G. Sankara Pillai, Ayyappa Paniker, and CN Sreekandan Nair -- had come to watch the play. “All these eminent people complimented me on my performance,” he says. “It was a huge encouragement for me.”

When Kavalam moved to Thiruvananthapuram, Venu went along. There, Venu befriended the director G. Aravindan.

Because the income from plays were irregular, Kavalam and Aravindan got him a job as a reporter in the ‘Kalakaumudi’ weekly magazine.

Pillai was a formidable interviewee. “If you wrote an article on him, Pillai would insist on reading it before it was printed,” says Venu. “He said that if one made a small change, the meaning would change completely.”

Unfortunately, because of a short deadline, Venu was unable to show the piece. When the article was published Venu avoided Pillai. But one day at a meeting Pillai suddenly spotted Venu. “Pillai said, ‘Have you learnt shorthand?’” recalls Venu. “I replied in the negative. Then he said, ‘How did you manage to quote me so accurately?’”

Venu says, “It was a great moment for me. Pillai embraced me and told everybody,
‘He is going to become a big journalist.’”

One day, Venu went to interview the Chennai-based director Bharathan at a hotel in Thiruvananthapuram. After the interview, Bharathan invited Venu to spend time with him in the evenings. “I started going regularly,” says Venu. “We became close, but Bharatan did not know I was an actor.”

But the truth came out when Bharathan’s friend, Padmarajan, said, “Venu is a prominent actor in Kavalam’s troupe.”

This was a turning point for Venu. “Immediately Bharathan gave me the hero’s role in his next film, ‘Aaravam,’” he says. But by then Venu had started shooting for Aravindan’s ‘Thambu’. Both films did not make an impact at the box office.

The big moment for Venu came when he acted as ‘Chellapan Aashari’ in Bharathan’s ‘Thakara’ in 1980. Because the cast had unknown actors like Pratap Pothen, Surekha and Venu, no distributor was willing to take on the film. It took two years for the film to be released, but it became an unexpected hit.

“The story and the actors were new,” says Venu. “The audience accepted me.” Thereafter, there was no looking back. Today, Venu, in a 30-year-career, has acted in more than 350 films.

At the Navodaya studio at Kakkanad, Venu, with grey hair and a stubble, is dressed in the brown cassock of a priest, with a cross hanging from his neck. He is playing the role of a priest in Lal’s ‘In Ghost House Inn’.

In the midst of the hectic shooting he shows gratefulness for his career.

“In one life I am having a thousand births as an actor,” he says. “It is a blessing. But there is a negative side to it also. I am so immersed in the roles that I sometimes lost touch with who I am. So I am on an inward search to know the real Nedumudi Venu.”