Gatekeepers to the afterlife 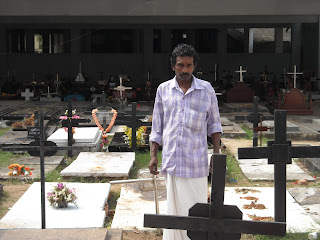 Gravediggers of three faiths – Hindu, Christian and Muslim – talk about the emotional travails of doing a job like this, for years together

Caretaker N.N. Ajit, 40, puts sand on the floor beneath the pyre at the Ravipuram crematorium at Kochi. Then coconut husks are placed over it. Wooden logs are arranged in rows on one side. Everything is now ready.

Within a few minutes, the body of a seventy-year-old man arrives in an ambulance. It is covered by a cream sheet, and placed on the floor near the pyre. A pujari intones the prayers. The son, bare-bodied and in a white dhoti, repeats the prayers in a low voice.

When the prayers are over, Ajit places the wooden logs all around the body till a tiny hillock is made. Then, with a small piece of wood, the son lights the pyre.

On the street outside, cars horns are blaring, while pedestrians rush about, as an individual -- a husband, father, brother, cousin, friend and a grandfather -- slowly turns into ashes. "I treat this as a job," says Ajit. "But since I am a human being, I am affected by what I see.”

He says the most difficult cremation to do is those of small children. “The sorrow shown by the parents is heart-rending,” he says. “Even relatives are very sad.”

For this difficult job Ajit charges Rs 1500 for a cremation. If the body is coming directly from the mortuary, he takes Rs 100 extra. "We need more wood to burn a cold body, since it is full of water," he says. "After deducting all the expenses, for firewood and coconut husks, I earn around Rs 365."

The average number of deaths works out to 30 a month or one a day. And Ajit does the job for several communities. “There are Brahmins, Nairs, Pulayars, a few Ezhavas and the Kudumbis,” he says.

Even Christians sometimes resort to cremation. Two years ago, just before Dominic Joseph of the CGH Earth Group died, he had requested that he be cremated. The family acceded to his wishes and the cremation was done at Ravipuram.

Jose Dominic, the son of Dominic Joseph and the managing director of CGH Earth, says, “All communities should resort to cremation. It is a wise way of addressing the issues of social equality and ecological concerns.”

Every morning, the parents of Thomas George (name changed) place a candle on his grave at the St. George’s church in the suburb of Edapally, Kochi. They have been doing this unfailingly since March 29, 2007. Thomas, 25, died of a gas cylinder blast in Dubai.

“He was their only son,” says grave-digger T.J. Martin, 42. “Whenever I see them I feel a pang of sorrow. Parents can never recover from the death of a child.”

Martin has been a grave-digger for the past 24 years. He has a fixed method for work. The moment the parish priest identifies the spot where the grave has to be made, he starts work.

He digs to a length and depth of six feet and a width of four feet. “The Bible says that we should bury a person six feet deep,” he says. But during the rainy season he stops at five feet because beyond that water will seep into the grave.

Unlike in most churches, Martin is a one-man show. When the coffin has to be placed inside the grave, it is lowered by ropes. “I ask the relatives present to help me,” he says. Then following the ritual throwing of small stones onto the coffin, Martin fills up the grave with mud and puts a stone slab on top. This takes about forty-five minutes.

On an average, there are two to three burials a month. So how does Martin manage to live in the midst of so much sorrow? “When there is too much of crying, I just step away and stand at a distance,” he says.

But what he cannot bear is the death of a child. “When a life is snuffed out so early, anybody will feel sad,” he says. “I am also a father. So I can understand the feelings of other parents. The sadness that is displayed is overwhelming.”

Martin says that of late he has been burying a lot of young people. “Most of them have died because of bike accidents,” he says.

In person Martin, who seems an introvert, says, “One day my turn will come to die. But when that event will occur, no one can say. Here we are, speaking to each other on a bench outside the church. We can step outside on to the busy road and one of us can die immediately in an accident.”

Back to the earth

P.P. Yousuf has been a grave digger at the Ponurunni Juma Masjid for eighteen years. Like the Christians, the Muslims also make a grave of six feet length and depth, and a width of four feet.

But there is one vital difference. The coffin, made of wooden slats, has no bottom and is placed inside the grave. When the body is brought for burial, three men have to step inside the grave and insert the body into the coffin.

“Our belief is that the body should be in touch with the mud,” he says. “We come from the earth and we have to go back to the earth.”

Listening to Yousuf is Koya Kutty, the vice-president of the mosque committee, who says, “We first throw a handful of mud and say that from the mud God has created us. When we throw the second handful, we will say, we are returning to the mud. Then we will throw a third handful and say, we will again come back from the mud through your help. This is our ritual.”

Yousuf has done about a thousand burials so far. And he vividly remembers the incident of a boy, whose father died in the early hours of the morning. The son had his last paper of his SSLC exams. “The family told him to do the exam,” says Yousuf. “Imagine his mental state. When he came for the burial in the evening, the sadness and grief on his face was indescribable. My heart broke just seeing him.”

But Muslims are forbidden to cry or wail at a funeral. “So we feel the sorrow very deeply inside ourselves,” says Koya Kutty. When a person dies, it is the duty, not only of the family, but of the community to bury him. So, there are no charges for those who do the grave-digger’s job.

So what is Yousuf’s feeling about his voluntary job? “When I step into the grave, I feel sad that one day it will be my turn to be buried like this,” he says.