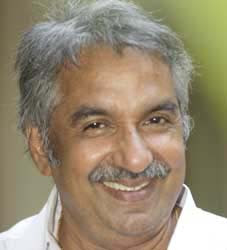 When former Chief Minister Oommen Chandy arrives forty-five minutes late for a 3 p.m. interview at the Ernakulam MLA’s Guest House, he has the decency to apologise. “I got stuck on the South overbridge,” he says. “Road repairs are going on and the police were releasing vehicles a few at a time from both sides.”

Chandy turns to K. Babu, the Tripunithara MLA and asks, “Why is work being done on a Sunday?” Babu replies, “The roads have to be repaired.” Chandy says, “It could have done it at night, instead of inconveniencing the people.”

Chandy heads for the dining room, splashes his face with water at the wash basin and sits down for lunch at 4 p.m. As he tucks into rice, sambhar and avial, the interview begins. Twenty minutes later, lunch is over and Chandy has to rush off, to Koratty, for a felicitation function in honour of Congress worker Augustine Paul who has spent more than 30 years at the panchayat level.

My interview is only half complete. Babu says, “Why don’t you come along to Koratty? You can do the interview in the car. Anyway, I am returning to Ernakulam.”

And so I take up the offer, and sit wedged between Chandy and Babu in the backseat of a Mitsubishi Lancer. But this former Chief Minister does not use a police escort nor is the red beacon on the roof of the car been switched on. So, in essence, we are traveling incognito.

Soon, Chandy tells me a story. He had gone to Dubai in 2005 and asked to see some of the worst labour camps. “I saw the living conditions and felt devastated,” he says. “Our cows lived in a better way. That was how bad it was. I could not go into the bathroom. And these Malayali boys who lived there were so smart and intelligent.”

His face looks sad as he says, “I realised I was at fault. I was a public figure. I was a chief minister and I just could not do anything to prevent this people from working in this situation. I took the blame for it.” Chandy got in touch with the Dubai government and ensured a marked improvement in the situation.

When we reach the United Club at Managalassery, Chandy is soon surrounded by white-shirted Congressmen as he is led to the stage.

Incidentally, Chandy’s schedule for the day went like this: A 9.30 a.m. start from his home at Puthupally. First stop: Changanacherry. Then to Kottayam, back to Puthupally for a condolence call, on to Poonjar, Ernakulam, Koratty, and onwards to Kodungalloor. From there he would be going to the Nedumbassery airport to take the night flight to Thiruvananthapuram.

Babu says, “A politician has no family life. On holidays they work harder, because there are so many functions to attend.”

It’s a high price to pay for power, prestige and privilege.