A park for all seasons and moods 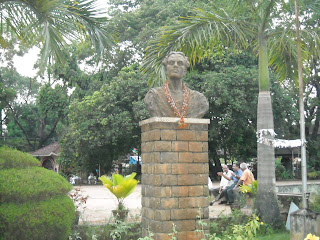 Photo: The bust of the poet Changampuzha Krishna Pillai

One evening, at Changampuzha Park, at Edapally, Kochi, Sindhu Pramod is sitting with her daughter Shreya on a bench. Shreya, who is studying in Class 7 at Campion School, says, “This park is wonderful, because of the many cultural activities that take place. Recently, we listened to Cochin Mansoor sing so many old hits. It was very exciting.”

The park was in the news recently when Mansoor tried to set a world record by singing non-stop for 24 hours. He lasted for 19 hours and 20 minutes before his voice broke.

In the evening the park is a microcosm of human activity. At one side, children are playing on swings, slides, and see-saws. On the open ground, in the middle, are elderly people sitting on plastic chairs, donated by the Cochin Corporation, reminiscing about life.

On the walkway, which runs all along the perimeter, middle-aged couples are taking a stroll. At one side, inside a small one-room conical structure, groups of men are playing carrom and chess.

The park, set in 1.85 acres of land, has been a Kochi landmark for years. The most striking feature is an actual Sea Hawk aircraft mounted on a pedestal.

According to the inscription, it ‘caused crippling damage to the Pakistani armed forces’ during the 1971 Bangladesh war. The Navy presented it to the park on December 4, 1999.

But what many people may not know is that the Changampuzha Park is a cultural force in the state. Says K. Balachandran, the president of the Changampuzha Samskarika Kendram: “Out of 365 days there is some cultural activity taking place on 250 days.”

There are Kathakali performances, dramas, dances, ganamelas, poetry readings, the recitation of shlokas, cinema premieres, and public meetings. There is a night dedicated to the songs of Mohammed Rafi and a nine-day celebration during Navaratri.

There are programmes held in honour of the late Kathakali exponent Kalamandalam Keshavan, music composer Muthuswamy Deekshitar and Carnatic vocalist Neyyanttinkara Vasudevan. “Some of the biggest artistes of Kerala have performed here,” says Balachandran.

And the most unusual aspect is that it is free, both for the participants and the audience. “The infrastructure, as well as the electricity, can be used without any payment,” says Balachandran. “I don’t think there is anything similar anywhere else in the state.”

But it was not always like this. Twelve years ago, it was overrun by bushes, grass and garbage, and became the haunt of anti-socials. Then Balachandran, with a group of like-minded individuals, set about changing things.

Thanks to generous donations from MLAs Simon Britto Rodrigues, George Eden, and K. Babu, and from the Local Area Development Fund of MP A.K. Antony, a new stage was built, a roof was installed, so that programmes could take place during the monsoon, while the walls were repaired. The ‘Fashion Marble and Granite Company’ sponsored another stage.

The park is the centre-point for a few organisations. The Edapally Senior Citizens Forum, which has 600 members, meets every Tuesday evening for an hour.

“Sometimes, a well-known personality will give a talk,” says president T.P. Antony. “On other occasions members relate their life experiences.”

Another organisation, the Kathakali Aaswadaka Sadas, organises Kathakali programmes. “Some members celebrate their marriages with a Kathakali recital,” says Balachandran. “Last year, there were eight programmes.”

All in all, the park, named in honour of the great poet, Changampuzha Krishna Pillai, is a most remarkable place, and a cultural asset to the state.