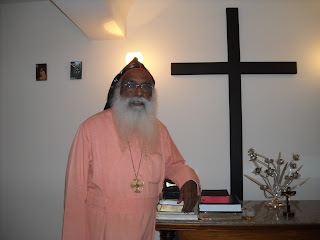 Says the Most Rev. Dr. Joseph Marthoma, the Metropolitan of the Mar Thoma church

It is not every day that one has lunch with a supreme head of a religious order. But I got this opportunity when I went to interview the Most Rev Dr. Joseph Marthoma, the Metropolitan of the Mar Thoma Church. We met at the palatial Vennala bungalow of Dubai-based businessman P.P.G. Mathew. Since the interview concluded at 1 p.m., it led to lunch with the Metropolitan. And the Mathew family had pulled out all the stops. Course after course of delicious vegetarian and non-vegetarian food followed.

Dr. Joseph Marthoma had come to Kochi to inaugurate a new church at Palarivattom. At 79, the only concession to advancing age is a walking stick. And, like any religious leader, he is a widely travelled man. One of his recent trips was to the riot-ravaged district of Khandamal in Orissa.

“The situation has improved a lot,” he says. “The churches are being reconstructed. However, the old wounds are still there.”

Dr. Joseph puts the blame on the vitiated atmosphere on western evangelism. “The drawback is that they denounce other faiths and cultures,” he says. “Theirs is a hit-and-run evangelism. They have no long-standing presence. They do great damage and the sufferers are the local, established churches, as well as the poor people.”

Dr. Joseph says that these groups should change. “They have the attitude that they are bringing the torch of light to the dark continents of Asia and Africa,” he says. “But times have changed. They must understand that the only way forward is mutual respect. Because of their aggressiveness, the riots took place in Orissa.”

He says the Mar Thoma church has a mission at Khariar Road, in Nuapada district, just 150 km from Kandhamal. “We had no problems during the riots,” he says. “The local people, comprising mostly Hindus, were the protectors of our mission.”

Dr. Joseph proudly asserts that the 10-lakh strong Mar Thoma church is an independent entity. “We do not take funds from foreign agencies for our maintenance and programmes,” he says. “We are self-sufficient.”

But Dr. Joseph bemoans the loss of value-based democracy and nationalism, as propagated by Mahatma Gandhi. “In the sixty years, since Independence, there has been a shocking degradation of values,” he says. “Earlier, politicians wanted to serve society, but now all they want to do is grab and grab.”

This rampant materialism and greed has afflicted the whole of society. When asked whether this has affected the religious instinct of people, he says no. “At every sacred place, year by year, the worshippers are increasing. And the offerings are also going up.”

However, he says, this is a sign of fear. “People have financial, emotional, and security worries, as well as an uncertainty about the future,” says Dr. Joseph. “Before 9/11, many Americans were not so religious. But following it, the churches were full. This has also happened in Mumbai, post 26/11.”

Besides the scourge of terrorism, there are other problems also. Like global warming, which has become a life-threatening crisis, as well as the tampering of food and genes.

“Our unscientific exploitation has disfigured the world,” says Dr. Joseph. “To make the people aware about these dangers is the biggest challenge of the 21st century.”