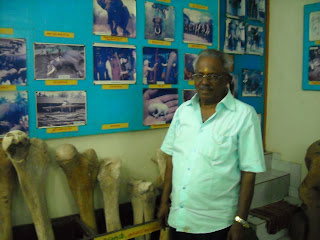 Dr. K. C. Panicker has subdued around 700 elephants in his nearly five-decade long career. He talks abut the highs and the lows of the job

On the morning of May 2, 1995, Dr. K.C. Panicker was sitting in the staff room of the Veterinary College in Thrissur when he received a call. An elephant, Paramakavvu Rajendran, had gone amok in a paddy field at Kaiparambil, about seven kilometres from Thrissur.

“He was not listening to his mahout,” says Panicker. As he was about to go out, with his dart gun, to tranquilise the elephant, he asked his colleague Dr. T. Prabhakaran whether he was interested in coming. Prabhakaran agreed. On earlier occasions, he had accompanied Panicker and helped him to make the right dosage.

When they arrived at the spot, Panicker saw that the elephant was running around in the field, while the mahout stood on a higher ground. “I felt it would be unsafe to shoot in the open,” says Panicker. So he asked the mahout to call the elephant towards the higher side. The mahout did so.

As Rajendran stood on the higher ground, Panicker took out his dart gun, placed the required dosage of drugs, fixed by Prabhakaran, inside a cartridge, and shot at the buttocks of the elephant.

The moment the dart hit the target, the elephant turned around and spotted the men. He gave chase immediately. Panicker and Prabhakaran ran for their lives. While Panicker fled into a clump of trees at the side, Prabhakaran went in a straight direction.

The elephant chased Prabhakaran. The sixty-year old professor ran into a series of small thorny bushes by the side of the paddy field, lost his balance, and fell. When Rajendran came up, he tried to scoop up Prabhakaran with his tusk. In the process, he made a deep gash on the chest. At this precise moment the sedative effect of the drug kicked in. Rajendran became immobile and gradually lost consciousness.

In the meantime, Panicker came back, and, with the help of onlookers, he carried Prabhakaran, who was bleeding profusely, to his car and went to the hospital. When they reached the entrance, Prabhakaran, who was lying on Panicker's lap, looked up and said, “I am unable to breathe.”

“It was the worst moment in my life,” says Panicker, years later, at the office of the Elephant Welfare Association at Thrissur. “I felt terribly guilty and shocked. Prabhakaran was just two months away from retirement. For months I did not go out for any tranquilising work.” (In 1996, Panicker set up an Elephant Museum and named it in honour of Prabhakaran).

Incidentally, the elephant, Rajendran, is still alive and lives in Thrissur. “I meet him now and then,” says Panicker. “Rajendran recognises me easily, but won't allow me to touch him, nor will he lie down in my presence. He knows that I am the person who gives injections.

"Rajendran does not regard me as a friend, but I don't blame him for killing Prabhakaran because the animal was in musth (a periodic condition in elephants, when the testosterone levels rises up to 60 times the normal and causes highly aggressive behavior).”

Panicker, 74, an expert on elephants, has tranquilised around 700 elephants in his 48-year career. But it was only in two instances that when the dart hit the elephant, it looked back. “Usually, the moment the dart strikes, the elephant runs forward,” says Panicker.

The academic uses the Xylazine Hydrochloride drug. The dosage depends on the size, age, and health of the elephant. “The calculation is 100 milligrams for 1000 kgs of body weight,” he says. “By observing the elephant I know how much dosage to give. The average weight is between four to five tons. If it is 4 tons, I give 4 ml.”

Panicker stands 40 feet away and usually aims the dart gun at the buttocks. “This is a thickly muscled area, and when the syringe hits, it has the effect of an intra-muscular injection,” says Panicker. “It takes about 10 minutes for the sedation to take effect.”

When that happens, an elephant will stop running. If the mammal is standing against a tree, it will lean against it. Soon, it will lose consciousness. After 45 minutes, the mammal will be in deep sleep. There will be no movement of the legs or the ears. “To confirm if the elephant is fully sedated or not, a mahout will touch the body with a stick,” says Panicker. “If the animal is not unconscious, it might attack the mahout.”

Under sedation the elephant is taken to a safe area, tied with chains, and kept under observation.

Nowadays, increasingly, more and more elephants are running amok. And the prime reason is the callousness shown by the owners and mahouts, especially when the elephant is in musth. The right way of treatment is to make the elephant rest for three months.

“A few mahouts and owners are eager to make money,” says Panicker. “So they will ensure that the elephant continues to work during this period. There is always the danger of it going out of control.”

R.K. Kaimal, an elephant consultant, says that elephants also get disturbed by the sound of car horns, thunder, and lightning. “Recently, an elephant became violent when a football hit it,’ says Kaimal.

Another problem is the ignorance about the psychology of elephants. “In earlier days, the owners were experts who knew everything about the elephant,” says Panicker. “Nowadays, if people have some money, they can buy an elephant, but he may not know anything about the animal. The mahout is also ignorant. Earlier, mahouts would receive a three-year training. But now, with barely a year's training they are handling the animal.”

Mahouts also have a tendency to move from elephant to elephant, says Kaimal. “The times have changed,” he says. “In the past mahouts remained with one elephant for a long time. Now, mahouts and elephants are unable to develop a relationship.” Because they don't understand the elephant, they tend to ill-treat it. The elephant gets very angry and at the opportune moment, it wreaks vengeance.

It does not help that the mahouts have developed bad habits like excessive drinking, thanks to temple organisers who give them free drinks. “The mahouts say they need liquor to get up the courage to handle an elephant,” says Panicker. “It is imperative that the government should set up regular and proper training for the mahouts.”

‘An elephant is like a child’
Says Balakrishna Shenoy, long-time owner of the elephant Chandrasekaran

Tell us something about elephants?
It is a social animal. In forests, they follow the joint family system. Every individual group will be having brothers and sisters and cousins. Their culture is to follow a dominant elephant.

When they are in captivity, they follow the same system. If we can prove our dominance over them, they will follow us.

Do elephants get angry when you punish them?
If it has done wrong, the elephant will accept the punishment. If we castigate the elephant when it is innocent, he gets very angry. He is not a slave. You have to treat him with equality. We should regard him the way we treat our children. The elephant has the brain of an eleven-year-old. Love and punishment has to go together.

What else angers an elephant?
If somebody touches his tusk, he does not like it. For example, if my wife touches my moustache, I will not get angry. But if a stranger comes and does the same thing, I will be furious. That is the case with elephants.

The tusk is an important symbol of his vanity and he hates it when people touch it without his permission. When an elephant is sleeping, if the mahout goes and touches it, the animal will become enraged.

What is their psychology?
Like human beings they have all types of moods. They laugh, they cry, they get angry, they feel depressed or jealous. They have the capacity to read our mind because they have a keen sense of smell. They can smell out the enzymes and the hormones. According to my experience, they know what we are thinking. Their voice is not in our hearing range. It is above the human capacity. We cannot hear them, but they can listen and communicate with each other.

They spend 16 hours a day eating.

Elephants give birth after a gestation period of 18 to 22 months.

A baby elephant weights about 90 kgs.

Elephants can live up to 70 years

An elephant's trunk, which has no bones, contains 50,000 muscles.

One tusk is usually shorter than the other. Just like people are either right or left-handed it is believed that these animals rely upon a dominant tusk. The tusk can grow up to 10 feet in length.

The captive elephant population in Kerala is about 700.