'Jesus is closer to you than you think' 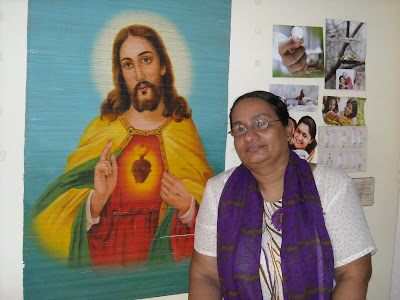 Sr. Jesme says that Jesus Christ has been the guiding force in her life

Every morning, when Sr. Jesme gets up, she says a small prayer that she learnt in her childhood. “Jesus, lead me according to Your will on this particular day. Don’t make me commit any sin.”

Thereafter, she gets out of bed. She does not have any formal prayers after that. “But I can pray at any moment,” she says. “Whatever decision I have to make, I do so after talking to Jesus. I listen to what He has to say.”

For Jesme, Jesus is her favourite person. “He is full of love and forgiveness and understanding,” she says. The nun says that she can also show her love towards Prophet Mohammad, Lord Krishna or Buddha, because they are all manifestations of God. “I am not a fanatic,” she says. “I don’t mind going to a temple or a mosque to pray.”

Asked to prove that God exists, she says, “How can I prove my hunger, my thirst, or the existence of electricity that passes through a wire? Questions about the existence of God are a waste of time. It is all about faith and belief.”

The nun, who wrote the best-selling autobiography, ‘Amen’, says that there is a divine nature in every man. But most people ignore this aspect. As a result, they go astray.

“If you pray with 100 per cent faith, Jesus will reply,” says Jesme. “He loves you. He is closer to you than you think. After all, He created you. Those who want to get in touch with God I tell them He is always there for you. You can share your joys and sorrows with Jesus.”

At major turning points in her life, Jesme has sought Jesus' guidance. In 1971, during a retreat at St. Mary's College, Thrissur, she asked Jesus whether she should become a nun. As she prayed fervently, she heard a query: 'Can you give your whole heart to me?' “Jesus was repeatedly asking this question,” she says. “In the end I surrendered and accepted Him.”

In 2007, Sr. Jesme was in a crisis. Because of her straight-talking nature, she fell afoul of her superiors. They retaliated by labelling her as insane. There was talk of taking her to a psychiatrist in order to administer mind-numbing drugs. Jesme went for a ten-day silent prayer at Kalady. “I asked Jesus, 'Why should I go on suffering? Should I remain in the convent?'” says Jesme.

When Jesus inquired as to how many years Jesme had been in the convent, she was astonished to discover that it was 33 years, the age that Jesus died and left the earth. “Jesus told me that I should not be in the convent in the 34th year,” says Jesme. “Because I heard His voice so clearly, I was able to get up the courage to leave. I have been happy ever since.”