The centre for epochal events 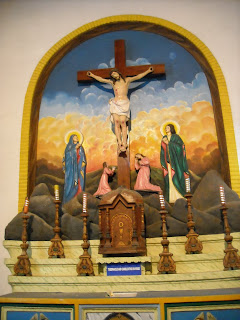 The Udayanperoor church, near Kochi, is celebrating its 1500th year. The Synod, which took place in the church in 1599, forever altered the history of Kerala Christians

Buses, cars, and trucks whiz past on the road in front of the Udayanperoor church, 16 kms from Kochi. And not many people who stare at the white-washed church through car windows can imagine that the church is celebrating its 1500th year, making it one of the oldest churches in Kerala.

The year-long festivities were inaugurated on January 17 by Prof. K.V. Thomas, Union Minister of State for Agriculture, and several programmes have been planned for the year. These include a get-together of old parishioners, a retreat for children, a Bible quiz, an inter-religious, as well as an ecumenical meet, and a jubilee rally planned for December. A stamp will also be released by the postal department.

But not all parishioners are happy. Says writer K.P. Joseph, “In 500 AD, one of the kings -- Mar Thoma Villalvattam -- was attracted to Christianity, and became a Christian. He then decided to build the Udayanperoor church. The Hindu kings did not oppose him. This church is a symbol of the secularism inherent in Hindu culture.”

Joseph says that this feature, instead of the religious and spiritual aspects, should have been highlighted. “Secularism is the corner-stone of Indian democracy,” he says. “However, this concept was not taken from the west. Instead, it has been in India for thousands of years.”

Meanwhile, it was inside this church that one of the most significant events of the early Christians in Kerala took place: the Synod of Diamper held in 1599.

The five-day Synod, which began on June 20, was held under the leadership of Aleixo de Menezes, the Portuguese Archbishop of Goa. Around 832 people attended, and this included 153 local priests, 660 laity, and a few others.

At the Synod, the Archbishop forced the St. Thomas Christians to adopt Western ways of worship. As a result, the Christians were forced to break away from the Chaldean Patriarch, and came under the control of the Latin Archbishopric of Goa. But there was a lot of heartburn over this.

Before the Synod there was little difference in the appearance between the Christians and the Hindus. For example, both wore long hair and carried swords. But Archbishop Menezies insisted that the Christians should keep their hair short, so that they would look different. “He made the women wear chatta (a white blouse) and mundu (dhoti),” says Joseph.

Many historical records, preserved on palm leaves, which highlighted the ancient traditions of the Christians, were burnt by the Archbishop. “Bishop Menezies inflicted a lasting damage, the effects of which are still felt,” says Joseph

On January 3, 1653, another major event occurred. This was known as the Coonan Cross Oath (Koonan Kurishu Satyam). Several thousand St. Thomas Christians, under the leadership of Archdeacon George, jointly held a long rope which was tied to a bent cross (Koonan Kurishu) embedded in the mud at Mattancherry, a suburb of present-day Kochi.

The Christians took an oath saying that they would no longer be under the domination of the Portuguese. This led to a permanent split in the Christian community. The rebels later formed the Malankara Syrian Orthodox, the Mar Thoma, and the Jacobite churches. However, the majority of the St. Thomas Christians continued to recognise the authority of the Portuguese and later, the papal authority at Rome and became known as the Syro-Malabar church.

But on a sunny and humid Monday morning, all this is in the past. The church is silent and empty. It has been converted into a museum. The sacristan K.M. Joseph shows the altar, which is placed three steps higher than where the men sat; and this area is one step higher than the women’s section.

“It showed the hierarchy of power in those days, although nothing has changed much in the present,” says K.P. Joseph, with a smile.

Because there were no loudspeakers in those days, the wooden pulpit is in the middle, placed alongside one wall, so that everybody could hear the priest talking. There are wax figures of the participants at the Synod of Diamper, as well as the Coonan Cross Oath.

Apart from the model of the church placed at one side, there are gold chalices on display, and various books written about the Synod. The tiled roof is held up by teak girders with intricate carvings on it.

It is easy to close one’s eyes and visualise the setting of the Synod, with all the dignitaries present, and the people listening in breathless silence to the stunning proposals put forth by the Archbishop.

Little did the gathering realise that the decisions taken there would reverberate through the centuries.