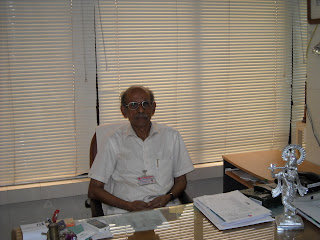 Dr. K.R. Rajappan is the first plastic surgeon in Kochi. He talks about how the Specialists’ Hospital, which he established in 1983, continues to serve the people

In 1975, a fish exporter, M.A. Suresh (name changed) approached the only plastic surgeon in Kochi, Dr. K.R. Rajappan, to do a hair transplant. He agreed.
The method used was the split-skin graft. “That means, you take a root of the hair, as well as the skin, from one side of the head and transplant it to the bald area,” says Rajappan.

However, the news about the successful operation was leaked to the media. Suresh's name was published. His family got upset. “I told them that I had not passed the information,” says Rajappan. “It was given out by the hospital where the operation took place.”

At that time, Rajappan was a freelance plastic surgeon operating in hospitals like the Medical Trust and the Sree Sudheendra Medical Mission. The operation on Suresh was the first cosmetic surgery done in Kochi and probably in south India.

After Rajappan completed his MBBS in 1960, he joined the orthopaedics department at the Thiruvananthapuram Medical College. “It was then that I got the idea of becoming a plastic surgeon, because there was nobody in Kerala who knew how to do it,” says Rajappan. “In those days, people had no idea about it. Somebody asked me whether I pasted plastic on the body.”

Rajappan did his MS (Plastic Surgery) at the Prince of Wales medical college at Patna. In the initial years, it was reconstruction surgery that was being done. “I would correct deformities caused by accidents,” he says.

But he remembers doing a touch of cosmetic surgery. An actor, who played character roles, had a drooping eyelid. It made one eye look narrower than the other. “I did the surgery, and corrected it, but looking back, it was not as beautiful as the surgeries that we do today,” says Rajappan.

Following his stint at Thiruvananthapuram and Calicut, Rajappan spent seven years in Kottayam Medical College, where he set up a plastic surgery unit. But feeling that he could do better in the private sector, Rajappan came to Kochi in 1975 and became a freelance plastic surgeon. Slowly, he built his reputation.

Meanwhile, on every Friday evening, Rajappan would travel to all parts of Kerala, from Kasargod to Thiruvananthapuram, doing operations to correct facial defects and deformities. “I did it for free, because most of the patients were poor,” says Rajappan.

One reason for his social service was because when he was selected for a government seat, at Cuttack Medical College, by the then Chief Minister of Travancore-Cochin, Panampilly Govinda Menon, he asked the young man, “What are you going to do after your studies?” Rajappan remained silent. Menon said, “You should serve the people.”

Then Rajappan's own father, K. Raman, said, “After you complete the course, you must help the poor people. And for those who live in the villages, you should provide free treatment.” Says Rajappan: “I took these principles to my heart and implemented them.”

In order to serve the people better, Rajappan decided to set up the Specialists’ Hospital in 1983 at Palarivattom. It became the first private plastic surgery hospital in Kerala.

“The initial years were difficult, because I was the only plastic surgeon in the city,” he says. “I had to take all the decisions on my own.”

As the number of patients grew rapidly, Rajappan felt the need to expand. So, in 1992, he moved to a new building near the North railway station. “Today, there are 21 departments, but plastic surgery, especially cosmetic surgery has become the most popular,” says Rajappan.

There are six plastic surgeons, led by his son-in-law, Dr. R. Jayakumar. Two other sons-in laws, Dr. R. Vijayan, an urologist, and Dr. Sabin Vishwanath, an orthopaedic surgeon, also work at the hospital. Rajappan’s three daughters, Mini, Beena, and Reena also help out. Today, the hospital does over a thousand free surgeries every year.

The patriarch, who turned 80 on August 6, has come a long way. Rajappan, the son of a landlord, grew up in Meloor, a small village in Thrissur district. To go to school, he walked several kilometres through forests and had to cross a river. He frequently saw squirrels, monkeys and wild boar. “There was a special charm to live so close to nature,” he says. “It also strengthened me as a person.”

Rajappan says a lack of ego, perseverance, and physical endurance are the reasons behind his successful career. In 2009, thanks to these qualities, Rajappan was able to set up the Sree Narayana Institute of Medical Sciences at Kuthiyathodu, at a cost of Rs 100 crore. “It was a dream come true,” he says.

And yes, this unassuming doctor has been able to make many dreams come true, not only in his own life, but in countless other lives, thanks to his pioneering work in plastic surgery.