'You gain spiritually when you suffer' 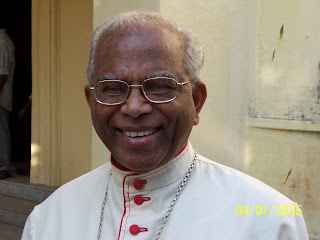 In 1971, Justice Joseph Vithayathil was travelling from Thiruvananthapuram to Tellicherry as the one-man commission to investigate the riots between Hindus and Muslims there. As they were going past the Mangalapuzha seminary, at Aluva, Joseph's aide, P. Subramaniam Potty, asked whether they could have a look at the seminary. So they stopped and went in.

The priests told Joseph that his son, Varkey, was preaching in the nearby Carmelgiri seminary. So Justice Joseph went across and met his son.

It was a rare meeting in Kerala. Varkey was a member of the Redemptorist congregation, which forbids members from visiting their homes to see their parents, unless they are ill or have died. “But like any son, I yearned to see them,” says Cardinal Varkey Vithayathil. “This meeting was arranged by God.”

Vithayathil says that God has always been there, offering solace and protection throughout his life.

A few years ago, he had gone to the Redemptorist-run college, Sadupadesa Vidyalaya, in Hennore, Karnataka. Vithayathil was talking to an aged gardener in the garden. A few students were standing nearby. Suddenly one of them said, “Cardinal, there is a snake near you!”

When Vithayathil looked down he got a shock: there was a krait between his feet. “This most poisonous of snakes lay unmoving,” he says. “If I had accidentally stepped on it, I would have received a fatal bite. But God saved my life. This was divine protection.”

Every day, when the Cardinal gets up at 6 a.m., he thanks God for the safe night and the arrival of the new day. “I then consecrate all my activities for the glory of God on this day,” says Vithayathil. “I say three 'Hail Mary’s', dedicated to Our Blessed Virgin Mary, an 'Our Father' and a 'Hail Mary' in honour of St. Joseph or any one of the other saints.”

Vithayathil then proceeds to the chapel to say the Holy Mass at 6.45 a.m. “The Mass is the central prayer of the church,” he says. “I want to glorify God and thank Him for his graces. I will say a prayer for the Pope, the Syro-Malabar church, the Bishops, my late parents and relatives, the poor, the homeless, the sick, and the suffering.”

Nowadays, a persistent back pain has made it difficult for him to have a public life, so Vithayathil prays a lot during the day. “I have become even closer to God,” he says.

Asked whether he gets angry with God when bad things happen, Vithayathil says, “Jesus Christ said that if we wanted to follow Him, we have to take up the cross. The death of parents and financial and physical hardships are all crosses. We can suffer with Jesus for the salvation of the world. It is very painful, no doubt, but we have to accept bad events with love.”

Vithayathil says that because of Adam’s sin of deliberately disobeying God, mankind has suffered. “It has made humanity weak,” he says. “Jesus Christ made amends for all the sins by dying for us. But he also wants us to share in that suffering for the salvation of the world. You gain spiritually when you suffer. The life of St. Alphonsa is a good example.”