Dripping perspiration in God’s Own Country 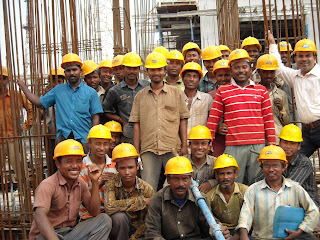 Thousands of workers from job-strapped West Bengal throng the construction sites in Kerala. They are drawn by the good wages and regular work

On the third floor of Tower 1, Block C, at the DLF New Town Heights work site at Kakkanad, a group of Bengali workers are hammering a piece of plywood onto to a concrete slab. At one corner, Dipu Das is doing some drilling. Kaushik Mondal is bending a rod to fit it around a concrete slab.
Sushanta Biswas is carrying some planks.

Keeping a sharp eye is Dhrendra Mahajankatti, of Shrihari Associates, a sub-contractor, who has provided the labourers for the work. “We have 168 workers and all of them are Bengalis,” says Dherendra. “They work hard and for many hours.”

The average age of the Bengali labourers is between 20 and 30. They send money home once a fortnight. “There is a lack of jobs in West Bengal,” says Dherendra. “That is why they have come here.”

A few minutes later, near the site office, Sanjiv Kumar Mishra, Manager (Safety Department), who is from Jharkhand, is giving a talk to 11 Bengalis who have just joined work.

“Safety means that one should always wear the helmet, the shoes, and the belt,” he says. “Because you are the sole breadwinner, the future of your family depends on the precautions you take. If there is an accident, your family will suffer. Please remember this.”

The men listen silently, and wait patiently for the session to end.

Later Dipu Das says that most of the accidents have taken place because the workers did not put safety belts while working on the higher floors. “Some are careless,” he says.

He remembers a youngster, Chandan, who was working on a site at Aluva. “He was an only child,” says Dipu. “Chandan fell from the eighth floor, because he had not worn a belt.”

Dipu is only 22 years old. He is from the West Dinajpur district in West Bengal. He stopped studying when he was in Class 9 because the financial situation at home was bad. “My father has a small paddy farm, but does not earn much,” he says.

Dipu went to Delhi, where he worked for three years on various construction sites. Thereafter, he proceeded to Shimla. “I had a friend, Gautam, who was working in Kochi,” says Dipu. “Whenever I talked to him, I would say that Shimla is very cold. And he would reply that Kochi is very hot. I decided that it is better to work in a hot place rather than a cold one.”

Dipu met up with Gautam at their village when they had both come home for a holiday, and accompanied him back to Kerala. Dipu has been working in and around Kochi for the past three years.

Back home, Dipu has a younger brother, Barun, and sister, Jharna, who are students. To ensure that they do well in school, he has organised private tutors for them. With a bright smile, Dipu says, “Barun passed his Class 10 exams recently with 87 per cent marks, while Jharna is in Class 8.” Dipu sends Rs 10,000 every month to his mother.

Unlike Dipu, Kaushik, 32, another Bengali colleague, is married, with two children. He also came from Delhi, attracted by the higher wages.

“The people are nice, but we are unable to communicate with them,” he says. “We cannot speak Malayalam and they don’t know Hindi.”

Nevertheless, through sign language, they are able to buy essentials, like rice, fish, vegetables, and oil from the Kakkanad market. “Now the shopkeepers are learning a few words of Hindi,” says a smiling Kaushik. “Hopefully, we will also be able to speak a bit of Malayalam.”

He says there will be more workers coming from West Bengal, because there is a construction boom in Kerala. “Whereever I go, I see buildings coming up, unlike in West Bengal,” he says. “There is a drawback to this. All the paddy fields are being converted. As a result, Kerala has to buy the food it requires from outside.”

Asked why there are so few Malayalis on the work site, Kaushik says, “Maybe, they have better jobs to do.”

But Dherendra states that the problem with Malayali labourers is that they all belong to unions, and put down their tools exactly at 5 p.m. “They don’t work as hard as the Bengalis,” he says. “They are very conscious of their rights, but not their responsibilities.”